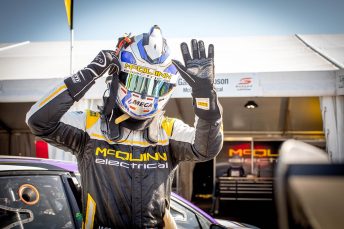 Garry Jacobson has narrowly missed a podium finish at Race 1 of the Townsville 400 for Round 4 of the Super2 Series Championship over the weekend.

Jacobson had a great start to the weekend, topping the first Practice session in Townsville and qualifying 3rd for Race 1.

The opening race of the weekend saw Jacobson gain too much wheel spin off the start line which dropped him into P6.

Jacobson recovered to finish P4 and was overall pleased with the Car Speed.

After Qualifying 4th for Sunday’s Race, Jacobson had a tough start to the final Townsville session.

Jacobson’s right rear damper broke and he had to pit, but by the time he could rejoin the session he was 4 Laps down.

Additional carnage involving other drivers on the Track caused the session to be Red Flagged, and Jacobson rejoined but finished with a DNF Result.

“Our qualifying was good, but I still need to work on my race starts. I dropped back a couple of spots at the start of Race 2 and started to get in the zone but I broke a right rear damper. Sometimes you got to have a couple of bad days before you have a good one so I’m looking forward to the next round already.”

Jacobson will prepare for Round 5 of the Super2 Series, at the Sydney SuperSprint on August 18-20, with all Races to be televised LIVE on Fox Sports.