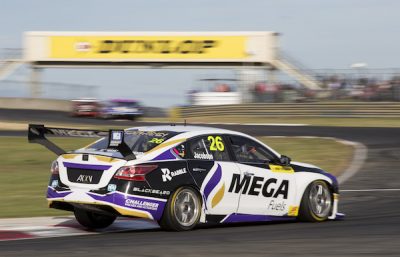 Despite coming off second best in the early stages of race one at Symmons Plains, MEGA Racing’s Garry Jacobson has survived a bruising opening race of the Dunlop Super2 Supercars Series to finish 21st.

After being fastest in practice yesterday, Jacobson qualified the Nissan Altima in sixth position for today’s round two opener.

On the fifth lap, the Shepparton-based driver was collected by Shae Davies at the notorious hairpin, who graciously admitted to Jacobson post race that he had made a mistake. This forced the MEGA Racing Nissan Altima to the pits for damage assessment by the MW Motorsport team that prepares the car.

The team did a terrific job to quickly get the 2016 Dunlop Super2 Series Champion back on track to gain points should trouble befall any of the competition.

Crucially, the 25-year-old from Shepparton heads into tomorrow’s racing third in the Dunlop Super2 Championship, just dropping one place from Adelaide.

Although disappointed, the youngster and his technicians are working to get the car back to the pace it showed yesterday and he’s showing his familiar positive attitude.

There are a further two 30-lap races to go tomorrow and he is still within striking distance of the Championship lead.

Throughout the course of the weekend so far, all three MW Motorsport Nissans have indicated fast race pace.

Jacobson will start Race 2 from fifth position at 9:10am AEST with the third and final race to start at 12:45pm AEST. Race 3’s grid will be determined off aggregate finishing positions from Races 1 and 2.

Both races will be carried live on Fox Sports 506.

“We were quite upbeat after ending yesterday on top of the time sheets, but weren’t able to maximise our qualifying pace,” said Jacobson. “It is our job tonight to go back to what we know, then look forward to tomorrow’s races.

“It was an unfortunate incident that caught us at the hairpin – Shae’s (Davies) apologised for the mistake on his behalf, but Championships are not won and lost with one bad result – we’re always looking forward.

“Having said that, the standard we aspire to is being right there with Paul (Dumbrell) and applying the pressure to the Championship leader at every stage of the season, so we are taking the points loss quite seriously as we always want to have that pressure on.

“Thankfully, Supercars have gone back to the individual qualifying format for races one and two this weekend. I am a massive advocate for that format and believe that it should be the standard for every round of the Dunlop Super2 Championship.

“It ensures that if a driver does have a problem – like I did today – that all isn’t lost for them for the weekend.

“We’ll fight back tomorrow – we’re starting fifth on the grid – so we’re working overtime to get back up the front in the MEGA Racing Nissan!”