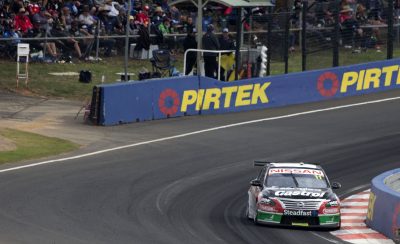 Garry Jacobson is looking to round off his first Supercars PIRTEK Enduro Cup campaign with Nissan Motorsport on a high this weekend on the streets of the Gold Coast.

After a personally strong performance at the Vodafone Gold Coast 600 last year which saw him charge from 18th on the grid to sixth in the opening race in wet conditions, setting up a debut top 10, Jacobson is hoping that working alongside Rick Kelly in the Castrol Nissan can yield further strong results.

The tight confines are expected to suit the Nissan’s characteristics better than Bathurst and coupled with Rick Kelly’s regular top 10 finishes at the Gold Coast – including a podium in the Nissan Altima era – the strength of the combination can shine through this weekend.
Jacobson has been on the Coast since Bathurst getting himself into peak physical condition for the event this weekend. With warm weather predicted on each day, drivers will be tested physically.

The 26-year-old from Shepparton has been gathering data throughout the year for RABBLE.club that is developing a series of athlete profiles for when it rolls out.

The performance at Bathurst has positioned the Castrol duo with a shot of the top three in the PIRTEK Enduro Cup.

Jacobson’s personal Dunlop Super2 drive in the MEGA Fuels Nissan at Bathurst sees him in with a shot at winning the Series for a second time as he edges towards 100 Super2 starts at Newcastle.

This weekend’s Vodafone GC600 is the final time the 2 x 300km races will be deployed, with Supercars announcing that next year’s race will be a single, 500km two driver race in an effort to simplify the understanding of the sport and the Enduro season.

Jacobson will be once again sporting his special helmet created specifically for this year’s PIRTEK Enduro Cup that honours his home region of the Goulburn Valley and hometown of Shepparton. The project has drawn support from Shepparton Motor Museum and Greater Shepparton City Council, along with Challenger Valves, MGA Insurance, FIX Muscle Performance, Thompson Motors and Varapodio Orchards.

Action gets underway on Friday from the Surfers Paradise beachside with television coverage of every session live on Fox Sports’ Bathurst Channel 506, 4K coverage on Foxtel 444 and coverage from Friday on Network TEN nationwide.

“This Enduro season has been very good for me, Rick and the team have given me a lot of confidence in my driving.

“The Nissan suits the street circuits pretty well, so I would be aiming for a good finish here this weekend. A top three in the Enduro Cup would be a good outcome.

“The Gold Coast has become such an iconic race on the calendar and outside the car there is always so much going on.

“The weather looks like it is going to be warm for the weekend, so I’ve already been up here getting some extra training in on the bike, I even got to cut a few laps of the racetrack (on the bike) and check it out earlier this week as the team that builds it were putting on the finishing touches.

“I’m looking forward to getting back behind the wheel again – particularly after a strong showing in the Saturday race last year – it would mean a lot to back that up.”