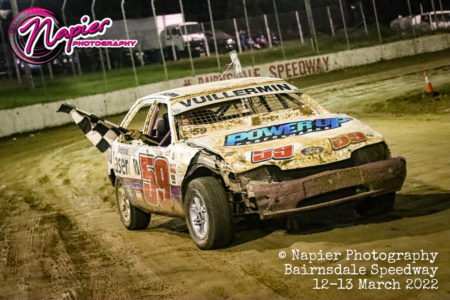 Bairnsdale Speedway Association hosted the annual Victorian Standard Saloon title over the Labour day long weekend and with seventy-eight entries attending the event was a huge success for the local entertainment provider with a huge crowd on both nights enjoying the family atmosphere and the sensational on track race action. Jacob Vuillermin from the Latrobe Valley went on to win the big event from South Gippsland’s Rhys Lansdown and Bairnsdale club member Mitch Foster.

Two nights of action began on night one with twenty-one qualifying races for the Standard Saloons supported by racing from the Hot Rods and Unlimited Sedans. After night one of race action Vuillermin had won his three races thus far and led the points table from defending champion Shane Stewart.

Huge crashes to Dev Saunders and Rob Tatterson seen then end of their race cars for the weekend after night one.

In the last chance qualifier Daniel Stewart the Victoria three driver leading into the event qualifier into the title race as did Ardley, Mitch Blencowe, and Wayne Sheerman after passing Spring on the final lap of twenty to move into the title.

Vuillermin and Lansdown qualified in the top two spots for the thirty-lap title race with Shane Stewart, Foster, Paul Domburg and Whittle the top six starters. As the race got underway Vuillermin who had damaged his car in his fourth heat up against the turn three concrete wall and raced and won the fourth heat with the damage and continued on in the final with the car as good as his crew could get it to be, assumed the lead of the race.

Defending champion Shane Stewart with a flat tyre exited the race on lap four of the race and on the same lap his brother Daniel also finished infield. At the ten-lap mark twenty cars were still competing with Vuillermin leading from Lansdown, Foster, Whittle, and Matt Domburg. Bradley Hill and Mitch Blencowe were the next drivers to leave the race track with damage or mechanical issues with Matt Domburg and Whittle swapping places in the top five.

As the second third of the race finished Vuillermin was leading Lansdown, Foster, Chrystie, and Matt Domburg with still eighteen cars on the race track. Cory Horter was the next driver to finish infield and out of the race with five laps to go there were seventeen cars competing and Vuillermin still leading the title race.

As lap thirty of the race circulated, Ardley came to a stop on the track and amongst confusion Vuillermin passed the chequered flag as did five other race drivers before the caution flag and lights came on. Officials declared the race completed and Vuillermin became a first time Victorian champion taking the win from Lansdown, Foster, Chrystie, and Chris Stewart promoted into fifth when another competitors damaged differential could bot be checked for compliance to rules.

After the race an emotionally drained Vuillermin spoke to media. “I have spent the last four days before the event getting the car ready after work with dad and my brother and I practically have not seen my missus and my son. I really appreciate their support so much, my family. I have podiumed before and was determined pre-event to give this a serious crack on one of my favourite tracks. Well done to the Bairnsdale Speedway people for how they ran the event and for what they provided for us competitors in the way of camping and facilities like showers etc on site. Congratulations to the other drivers on their results and thank you to everybody for their support.” Shared Vuillermin.

Other racing on the weekend included the Unlimited Sedans who competed in two features over the weekend with a series round on night one and a club points event on night two. Corey McDonald won the final on night one by more than ten seconds as he flew around Bairnsdale Speedway in his turbo charged 3.8 litre Buick powered race car. Sale man Johnny Young finished second from Peter Cox, Corey Ramsdale and Gavin Ough.

On night two Young picked up the victory in front of Troy Hutchison from the Latrobe Valley, Travis Ramsdale, Tim Williams, and Peter Cox.

Racing returns to Bairnsdale Speedway on April the 16th with Sprintcars, Compact Speedcars, Wingless Sprints just some of the classes competing.