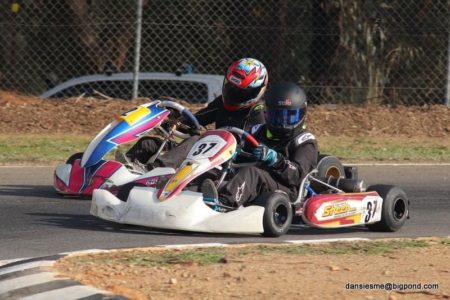 Jackson Stone left the opening round of the Golden Power Series with a strong top five finish at the Goulburn Valley Kart Club. Stone was back on circuit over the weekend for the second round of the series out of the Bendigo Kart Club. Running in a near twenty kart field in KA4 Junior Heavy, Stone was looking to take his first podium of the season. Jackson showed encouraging pace in Saturday morning practice and looked to qualifying to get his racing weekend started.

Stone hit the track for qualifying and the team felt they had the kart in the window to get up the grid. The Sheen Group sponsored entry immediately jumped into the top ten and was pushing forward on the edge of the top five. Jackson made his way into the top five and was only a few tenths off pole position and right in the battle. Stone did a great job to settle in fifth spot overall and this had him off the inside of the third row of the grid.

Stone got a clean get away in the opening heat, settling in fifth spot off the start. The DJM Race Engineering supported entry made his way up as high as fourth throughout the race. Jackson battled hard throughout the rest of the race but came home in fifth spot overall. This had him gaining some good points going into heat two.

Stone looked to heat two and was hoping to try and make his way forward. The Sheen Group backed entry got a great get away, jumping into position four overall. Jackson sat in fourth the majority of the race before he was able to make his way into third spot overall in the back half of the race. Stone was able to come away with a credible third spot and more valuable points to his championship. The team now looked to Sunday to try and keep the good results going.

Stone was starting out of position four for the third heat and was looking to once again move forward. Unfortunately, Jackson was involved in an incident on the opening lap of the race and going to the rear of the field. The DJM Race Engineering supported driver had steam coming out of his helmet and was making his way back through the field. Jackson was able to make his way back into the top ten showing excellent pace and strong race craft. Stone came across the line in position eight and was looking to grab a podium in the final.

The team tuned up the kart for the final and Jackson was looking to get his podium he was chasing. In what was a hectic opening lap, Stone was able to make his way up to second spot in the lead group. The Sheen Group backed entry dropped to third place overall but was clear of the rest of the field. Jackson was able to come home on the podium in position three grabbing his first podium of the series. Jackson spoke post weekend on grabbing his first podium finish. “I’m really happy with my driving this year. I feel that everything has come together. I’d like to thank Sheen Group my mum, dad and sister for all of the support and getting me to the meetings”.