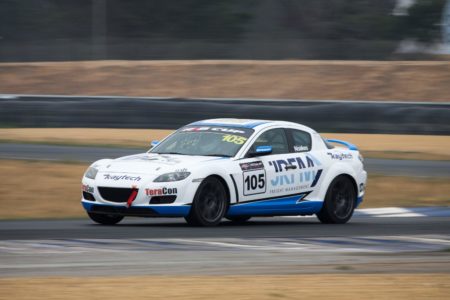 Noakes spent the past three years in the highly competitive Series X3 NSW Hyundai Excel Championship fighting for the championship right up to the last race in both 2018 and 2019.

The New South Welshman recorded several podium and pole positions over the past two years and is looking forward to progressing his development on and off track via the very credible RX8 Cup Series.

“Transitioning from karting to circuit racing has been great and three years in the Series X3 was a great place to make the transition and learn the tracks with close, hard and competitive racing” said Noakes.

Whilst disappointed with falling just short of the championship last year, it wasn’t for the lack of effort. “It was a hard-fought battle with about 4 of us trading positions and folding mirrors all year, the top step would have been the ultimate reward for the effort however the lessons I learnt and the experience I have gained I’m sure will help with this next step in my motorsport career”.

Jackson will focus on the NSW rounds with a hope of securing the budget to be able to get to Tailem Bend and Morgan Park. “I would obviously love to do the interstate rounds and will continue to work hard to try and raise the necessary funds/sponsorship to make this dream a reality,” he said.

“There’s a lot to learn this year, adjusting my driving style from front to rear wheel drive, how we engineer the car and get the most out of it will be a big challenge against some experienced competitors. Being a tightly controlled, one makes series every tenth counts and it takes time to learn where to find those last “ little bits” so we will approach this year with some realistic goals and if we can be racing with the front pack towards the end of the season that will be a great result” said Noakes.

It’s been a busy off season with the team taking delivery of the car late December, the Christmas period was spent learning the car and for Jackson and his business Racingline Graphics it was about designing and wrapping the car in its new livery, a clean look designed to make the sponsors names the feature.” As a 20 year old Motor racing is hard work financially and so gaining some support is vital to be able to go racing, I appreciate the support of some great people and businesses and look forward to doing them proud in 2020” he said.

Wakefield Park hosts the opening round of the 2020 RX8 Cup Series on February 29 – March 1.