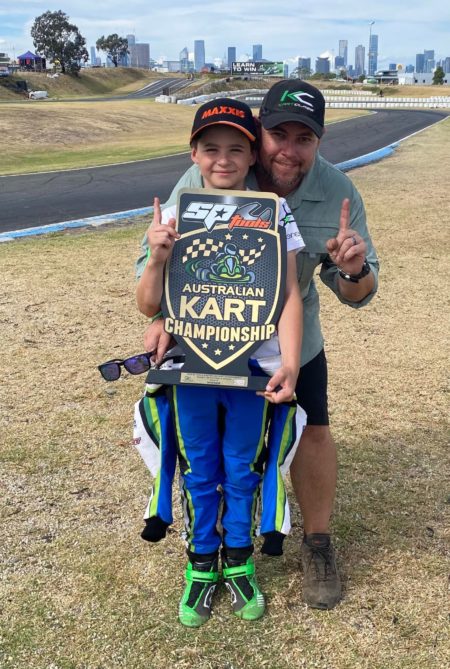 Jackson Brasher made his anticipated debut in the SP Tools Australian Kart Championship over the weekend. Brasher has had a breakout twelve months in the sport, going from never being in a kart this time last year to being one of the main fancies to kick off the biggest series of karting in the country. Jackson had done lots of work around the Todd Road circuit and was ready to put his best foot forward in the championship.

After two days of full on practice, Brasher hit the track for Saturday morning qualifying and was looking to start as far up the grid as possible. The A1 Engines Motorsport powered driver hit the track against his nineteen other competitors and was straight in the battle for pole position. In an intense session, Jackson hit the top of the time sheet multiple times and had his father and team on the edge of their seats. In an epic session to start the championship, Brasher set the third fastest time, putting him on the inside of the second row for the opening two heats!

Brasher was straight into the action again in heat one, dropping back to position four off the start. The Kart Class backed entry made a move for position three and then got as high as second place throughout the race. Rival Cruz Kelly made his way back in front of Brasher and the two drivers chased after race leader Blake Haigh. In a close finish with the top three only separated by three tenths of a second, Jackson came home in a strong third spot with great points to start his championship.
Heat two and Brasher got a much better start moving into the lead on the opening lap of the race. Brasher dropped down to position two with Carter Lamperd taking the lead and Kelly right behind Jackson. Brasher’s race changed complexion in the middle stages, with himself and Kelly coming to blows and dropping Brasher outside the top five. Jackson was able to recover and cross the line in position six but was classified in position eight with post-race infringements applied.
Brasher, disappointed with the second heat was determined to bounce back in heat three to finish his Saturday on a high. The A1 Engines Motorsport powered entry got a strong start slotting into positon three at the end of the opening lap. Jackson stalked the top two drivers before making a move for second spot on lap eight. Brasher set the fastest lap of the race and came home with his best result of the weekend in second spot going into the fourth heat.

Brasher took to his final heat and was looking to grab as many points as he could and be as far up the grid for the final as possible. The Kart Class backed entry jumped straight into second spot off the start and the battle with Kelly resumed. With the two drivers trading lap times and going to battle over the race, it was building towards an exciting final. Jackson came away with another strong second spot only one tenth behind Kelly and putting him out of position four for the final.
The atmosphere was tense down in the pits as Jackson hit the track for his final. The A1 Engines Motorsport driver settled into fourth at the end of the opening lap but quickly moved to third on lap two. Brasher made another move to second on lap three and now had a gap to close to get to race leader Kelly. Brasher used the rest of the race to close down the margin and lap twelve hit the front and put the crowd on their feet. In a tense finish and class racing by both drivers, Brasher was able to come with the win on debut in the SP Tools Australian Kart Championship!

Both Jackson and his father Damien were in disbelief following the final. “I’m lost for words, this is a dream come true” Jackson spoke post-race. Damien also was full of emotion following his young sons win. “WOW we couldn’t be happier, a massive shout out to Dave Sera, Luis Leeds and Brett Arnett”. Jackson will now look to the next round of the Championship in South Australia in April.