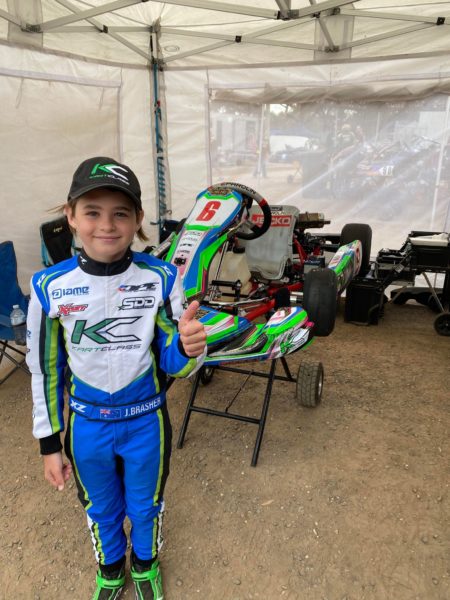 Jackson Brasher returned to his home track of the Bendigo Kart Club over the weekend for the second round of the Victorian Golden Power Series. Brasher has had a block buster start to the 2022 season taking out multiple wins including and Australian Kart Championship opening round! Jackson was on the podium at the opening round of the series in third and was looking to move forward again. Saturday morning qualifying was super important to get the young charger’s weekend of to a great start.

Brasher hit the track for Saturday qualifying with a strong field of nearly fifteen drivers. The A1 Engines Motorsport powered and sponsored entry immediately made his way into the top five and was challenging to take pole position. Jackson sat in third position most of the session but a last-ditch attempt got him into second spot overall. This put Brasher on the outside of the front row for the opening two heats alongside championship contender Archie Bristow.

Jackson was on the outside of the front row in heat one and due to this dropped a spot to third. Brasher and Bristow were now chasing race leader Sam Sidwell. The top three all battled nose to tail with the Kartclass backed entry making a move for second spot on lap five and looking fast. Jackson set a new fastest lap of the race trying to chase down the leader. Brasher crossed the line in second spot overall under two tenths behind the race winner.

Sunday morning came around and Brasher had three races to try and work his way forward. Jackson had another rough start, dropping back to position four and had work to do. The A1 Engines Motorsport powered and sponsored entry made his way to third spot on lap three and once again joined the front pack. As the race continued on and Brasher made his way into second spot with three laps to go and was right in the battle for victory. In another close and exciting finish, Jackson came home in position two grabbing more valuable points for his championship!

Brasher was out of the front group once again in heat three and slotted into position three off the start. In a three-kart battle at the front, Jackson was showing good pace and was right in the hunt once again. The Kartclass backed entry made a move into second on lap five and now stalked the race leader. In an exciting finish, Brasher was able to take the lead on the penultimate lap and hold on for victory in an awesome finish. Jackson now looked to the final to try and take his first-round win in the series.

Brasher got a great start in the final and was able to into position two off the start. The A1 Engines Motorsport powered and backed entry didn’t waste any time, jumping into the lead on lap two and was looking to break away. In his best performance of the weekend, Jackson was able to lead and break clear of the field and take his maiden Golden Power Series round win by nearly two seconds! Jackson father Damian spoke post-race weekend on his son’s weekend of racing. “It was another tough weekend, happy to get the win. A huge congrats to Archie and Sammy, always a pleasure to share the podium with these 2 rockets”. Brasher will now look to the second round of the Australian Kart Championship in two weeks at the Southern Go Kart Club.