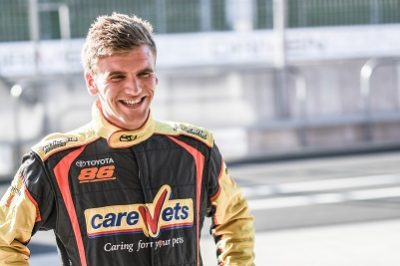 After a punishing season of racing that took him from the V8 Supercar races at Pukekohe all the way to Invercargill and back to Hampton Downs, Christchurch driver Jack Milligan has won the 2017-2018 Toyota 86 Championship with a race to spare.

Milligan, 21, has an extensive history of single-make racing. He was the CareVets Racing scholarship driver in last year’s championship and won the rookie title.

Coming into the race weekend Milligan had a strong but not unassailable lead, heading Michael Scott and Connor Adam by 30 points and 123 points respectively. With 75 points available for each win the Championship was still wide open.

Qualifying on the front row for Saturday’s first race, Milligan was up against rising star Jaden Ransley, who had taken pole. Ransley (15) drove the race of his life to hold out Milligan in a fast, clean no-hold-barred match of racing ability from both drivers.

All the way to the chequered flag Ransley maintained control, never letting Milligan pressure him into a mistake.

“I’m really happy to have won this one. It’s the best way to start the weekend.”

Tom Alexander was third in a dramatic return to form after his car speed faded in the southern rounds.

Michael Scott, who came to Hampton Downs second in the championship, was caught up in the midfield incidents and finished the race seventh, carrying front end panel damage. He did set fastest time of the race, a 1:16.251.

In this morning’s partial reverse grid race, Jacob Smith had pole with Milligan starting fourth of a field of 14.

Smith sped into the lead in the race through the first turn, with cars running behind him four-wide.

“It was pretty mad out there at the start. I was glad to be driving my own race,” said Smith.

Milligan carved through the field to attack Smith for lead, fading slightly at lap seven and then surging back to draft Smith down the main straight and almost snatch the victory away.

In the final race of the weekend and the Championship, Milligan was swamped off the start line as four cars flew through the blind, downhill turn one side by side. The leading bunch formed a fast four car draft as the lap progressed. Michael Scott then spun coming out of the dipper, putting an end to his challenge for a final few points. Rookie Jordan Baldwin led but was slowly consumed by the hard-charging pack behind him.

Tom Alexander had carved through to lead from Jacob Smith, Milligan now moving through to third and then a lap later overtaking Smith and moving up on Alexander.

The front four moved away from the rest of the field, Alexander and Milligan soon forming a two-car battle for the lead that went all the way to the chequered flag. Jordan Baldwin re-took third from Jacob Smith on the last lap.

“It’s been a long road to the title, a lot of hard but clean racing. I can’t thank the CareVets team enough, my mechanics, Dr Keith Houston who put the CareVets Racing programme together and showed faith in me – it’s been amazing,” an elated Milligan said afterward.

Alexander was pleased to finish the season with a victory, and says the #11 car is ‘back on top form’.

His 2018 season continues with the Kiwi Stone Brothers team, racing in the new SuperUtes class in Australia where he already has a win to his name.

Three new drivers – one an international – signed up for the final round of the 2017-2018 Toyota 86 Championship, boosting the final round grid to 15 and the whole-of-series statistics to 22.