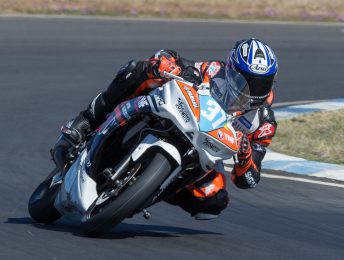 Race One featured a skirmish between Mahaffy, Tommy Edwards (Alpinestars, Yamaha YZF-R3), Ford and Taylor for the victory. Mahaffy managed to gain the ascendency quite early on, leading the race for the opening laps. However his rival Edwards managed to take the lead at the half way mark of the race.

Mahaffy and Edwards would trade places on just about every lap for the remainder of the race. By this time the top four were beginning to build a significant gap to fifth place getter Ben Bramich (Ron Angel Classic Racing, Yamaha YZF-R3).

The race came down to the wire as Edwards took the lead on the penultimate lap. However, Mahaffy managed to overtake Edwards on the final lap for victory. Edwards mentioned that he attempted to overtake Mahaffy on the final lap, but a scare with losing traction caused him to think championship and maintain the second place.

Ford and Taylor finished close behind the pair in third and fourth positions. Six tenths of a second covered the top four as they crossed the finish. Taylor managed to set the fastest lap of the race, which was also a new race lap record for the class.

Quotes from the Riders

It was a great race! I had sun glare in my eyes the whole time but I tried to not let it affect my performance. I tried to play it stratiegely, even sitting behind Tommy at times to see which parts of the track he was at his strongest. It all came down to the last lap and I managed to complete the overtake. I could even see Tommy’s shadow as he tried to pass me on the last lap but I saw he almost had a moment. Overall great race!

After Jack overtook me in the inside, I tried to retake my position and then the front end and the back lost traction and the bike did a bit of a skid. From there I thought championship and followed Jack to the finish. It was a close race and Jack was really fast. I’m getting a lot of experience racing in Australia and the boys in all the classes are really fast, road racing is looking really strong at the moment.

Third is a great start to the weekend, I didn’t have a great race in the Hi-Tec Batteries Supersport 300 race but its great to be up near the front in the YMF R3 Cup. We are using last year’s suspension but I’m just trying my hardest to stay near the front.