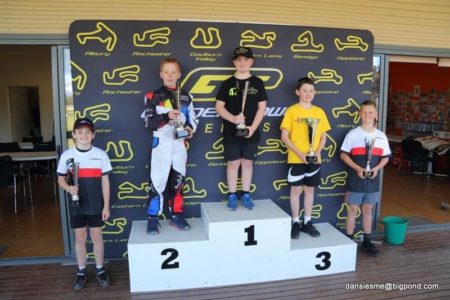 Jack Jenkins returned to the go kart circuit over the weekend for the third round of the Victorian Golden Power Series out of the Albury Wodonga Kart Club. Jenkins has started his series in superb fashion with a win at the opening round at the Goulburn Valley Kart Club and a very close second at the last round at the Bendigo Kart Club. Jack was up against a field of nearly thirty drivers and qualifying was the starting point of his weekend.
Qualifying was on a cold and chilly track and Jack was looking to get as far up the grid as possible. The Pulse Tuning supported entry was able to quickly make his way into the top ten drivers and was pushing hard to be in the top five racers. Jenkins moved into the top five with championship rivals Jai George and Lucas Costanzo and was battling position. In an excellent qualifying session, Jack was able to set the fourth fastest time and had himself starting off the second row of the grid.
Jenkins headed out for the opening heat and was looking to put his best foot forward. Jacks race was unfortunately over before it even began, with a penalty being applied for a warm up lap infringement. Jack while disappointed, had full concentration on the next heat race to try and rebound.
Sunday morning was the second heat for the championship leader with Jack dropping back to fifth at the conclusion of the opening lap. The Pulse Tuning supported entry stayed in the that spot for the opening few laps before making his way up into the top three. The top five were all nose to tail and continue to swap positions in a great heat race, with Jenkins mixing with the best. Jack was able to come through in second position overall in a great rebound from the opening heat.
Due to his heat one result, Jenkins was starting out of position eight and was keen to continue getting strong results and good points. The Cadet 12 driver unfortunately dropped back to ninth off the start and in the early laps lost touch with the leader but was battling for the minor positions. Jack was able to make his way into position seven across the race and trying to push onto the edge of the top five. Jenkins crossed the line in position seven overall and now had moved up a spot to start the final.
Position seven was the starting position for the final and Jenkins knew his start was going to be crucial. The Pulse Tuning supported entry got an excellent start and was able to move up to position four on the opening lap and on the edge of the podium. Jack was able to make a move for third spot in the opening few laps and had the eyes forward. In an excellent drive Jenkins was able to come away with his third consecutive podium in the Golden Power Series in third place overall!
Jack’s parents spoke post weekend on their young son’s podium finish. “Jack had some challenges on the weekend. Despite an initial setback, Jack’s consistency and persistence paid off. Really happy with his podium. Huge thanks to Glenn Riddell, Steve Riddell and the whole team Pulse Tuning team for their support. We now look forward to Round 4 at Eastern Lions Kart Club”. Jenkins will be back on his home track for the next round of the Golden Power Series looking to continue his strong season.