Jack Daniel’s Racing off to the wild west

Jack Daniel’s Racing off to the wild west 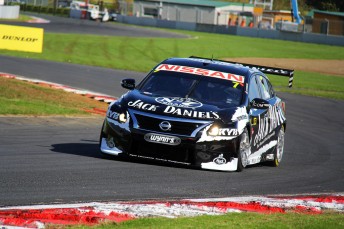 Jack Daniel’s Racing drivers Rick and Todd Kelly are ready for their annual trip to Western Australia, with the team’s Nissan Alitmas set to take on Barbagallo Raceway for the Perth 400 from May 16-18.

Following an encouraging run at the recent New Zealand round, the brothers are looking for strong results on the uniquely abrasive track surface, which will place emphasis on Friday’s three 20 minute long practice sessions.

The weekend will return to the Super Sprint format that was utilised at Winton and Symmons Plains, with a pair of 100km long races on Saturday, and a lone 200km raceon Sunday.

“Barbagallo Raceway offers a slightly different format of racing, so it will be interesting for us as it puts a little bit more pressure on with pit stops coming into play,” said Rick Kelly.

“From a driver’s point of view, the track is quite different.

“We’ve just come from a really exciting track in New Zealand, that you have to push the car around, and it’s got a lot of high speed stuff.

“You get to Perth, and it’s quite a slippery surface that promotes a very different style of driving, to more of a smooth style.

“Last year, James Moffat in the Norton number 360 car did an outstanding job all weekend, he had that car in the top-ten, and for the rest of us we couldn’t quite get that right.

“So that’s a big challenge for us this year to head back there and improve on the style we are driving the car with, and the work on the overall car setup for the conditions.

“A lot of water has passed under the bridge between last year and this year, we’ve really learned a lot about the cars and how to drive them smoother.

“I’m quite excited to get to WA and see if we can translate that into some improved results.

“It’s obviously the only race for the season in Western Australia, so the whole place gets right behind the event.

“Todd and I head over there a couple of days early to see everyone, there’s a lot of activations and sponsor engagements going on in the lead up, so it’s certainly quite an exciting event for us.”

“Barbagallo is a very unique circuit, very low grip and it takes a bit of a different setup and driving style to the circuits we have been to this year,” said Todd Kelly.

“A lot of pre-event planning into the (practice) session structures, to make sure we land on a good setup for the weekend.

“All in all, at the last event (in New Zealand) qualifying wasn’t too bad, as I had three top-ten runs, but I didn’t manage to turn any of those into a reasonable race result.

“So that’s going to be the focus for Perth, to again qualify in the top-ten, but more importantly really focus on converting that into better race results.

“I can’t wait to get there, it’s a track I really enjoy, and if you make any mistakes there you spend the race watching on from the sand traps!

“It’s one of those places that you have to push really hard, but you have to be smart about where you do it, especially in the races.”