Italian and German Marques on Show at Final MRA Round

Italian and German Marques on Show at Final MRA Round 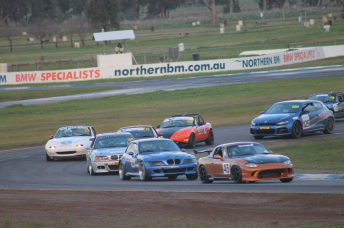 Italian and German racing machines are the headline acts for this Sunday’s fourth and final round of the Motor Racing Australia (MRA) Series at Wakefield Park.

In the Italian corner is the Alfa Romeo East Coast Challenge, organised by the Veloce Racing Association.

The East Coast Challenge includes a mixture of old and new Alfas, ranging from the 1970s and 80s GTVs and Guilia Sprints through to the more modern 156 and 147 models. The result is a massive 37-car grid, with frontrunners likely to include Phil Baskett (Alfetta), Alfio Musumeli (Alfa GT) and David Capraro (Alfa 156 GTA).

Current points leader Sean Bell (BMW E30 325i) heads into the weekend as favourite; he will be joined on the grid by brother Chris and sister Jess, who makes her racing debut.

Bell will be chased hard by title contenders David Levy and Brian Bourke, while Canberra-based drivers Glenn Potter, Simon Mitchell and Ray Kwong will be hoping local knowledge will give them an advantage.

Modern Sports Cars has been one of the most successful categories of 2014, and the season closes out at Wakefield Park this weekend.

The series features affordable and popular two-door cars, with Mazda MX5s and BMW E30s being popular choices amongst the category front-runners.

Two one-hour endurance races will be held, and will include compulsory pit-stops. The father-and-son combination of David and Rob Viner currently leads the series after consistent results in the opening rounds, but favourites for outright victory will include Brian Anderson/Wayne Twist (BMW M3), Tony Bonanno/Shane Otten (BMW M Coupe) and Daniel Reynolds/Matt Stubbs (Mazda MX5).

The Mazda MX5 Cup is also on the program this weekend, with some competitors double-entering in both the MX5 and Modern Sports Car races. Matilda Mravicic, Luke Otten and Chris White should be among the MX5 frontrunners.