Isuzu on a mission with WA Safari

Isuzu on a mission with WA Safari 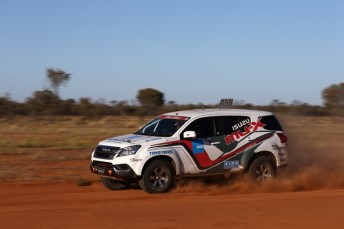 ‘First diesel outright winner’ is the goal set by the team at Isuzu Motorsports as they prepare to do battle later this month in an event previously dominated by petrol-powered vehicles.

Cross-country racing star Bruce Garland will spearhead a three-car team tackling the Australasian Safari, which starts with a ‘Safari Show’ at Perth’s Wanneroo Showgrounds on Friday, September 19 and finishes in Kalbarri (592km north of Perth) on Saturday, September 27.

All three cars are competing under the banner of Isuzu Motorsports, a performance parts company owned by Garland and his long-time co-driver, Harry Suzuki. They also have support from Isuzu operations in Japan, Thailand and Australia.

“I still reckon a diesel can win the Safari even though history has so far proved otherwise,” five-time winner Garland says.

“You need the right car, the right crew and the right tyres and a bit of luck, so if we have all that lined up – and we believe we do – then we shall see what happens. It’s certainly a trophy I would love to add to my collection.”

Garland’s D-MAX is now putting out around 200kW of power and 700Nm of torque compared to figures of around 190/600 last year, while the MU-X Di Lallo will drive is putting out around 180kW and 600Nm. Standard figures for either car straight off the showroom floor are 130/380.

Class wins are well within the grasp of both crews and Garland, who turned 56 this year, still believes he has the knowledge and the skill to win outright again.

He’s fit – having recently done much of the building of the new family home – and fully recovered after several years of medical problems including a fractured vertebra, heart attack and five bypasses, and surgery for prostate cancer, none of which stopped him racing.

“I think it was race ace ‘Gentleman’ Jim Richards who said old age and treachery will always beat youth and exuberance and I wanna be just like him! Jim’s still racing and still getting great results.

“The Safari is as much about driving smart as driving hard and that something you only learn from experience. Harry and I have the experience, the car is great and a proven performer, and we certainly believe we can do it, if a little luck comes our way.

“You could say we are cautiously optimistic – but you can also be sure we will party hard if we do win!”

Garland and Di Lallo will use the event to test some new tyres for long-time sponsor, Toyo. They’re confident the tyres, which have been specially designed for use in the Middle East, will perform as well and reliably as the Mud Terrains the team always uses in wet weather.

Garland and Suzuki are contesting the event for the 18th time, and have won it five times. Di Lallo has contested the event three times in the past, finishing each time and earning a class podium position in 2011 on his second attempt.

He also finished his first Dakar in 2013 in 38th position outright, gaining 101 places from his start place with his Red Earth Motorsport team and the backing of Isuzu Motorsports.

The team will also provide some back-up to two other Isuzu MU-X crews, one a Thai entry and the other to be campaigned by Garland’s long-time mate and another Safari stalwart, Reg Owen.

The Thai connection comes from Garland and Suzuki’s experiences racing in cross-country rallies in Asia and Garland describes the two crews as ‘good young guys who know what they are doing’.

The 2014 Australasian Safari will kick off with the ceremonial start in Perth before competitors head 424km north to Geraldton for the short Prologue to determine starting order.