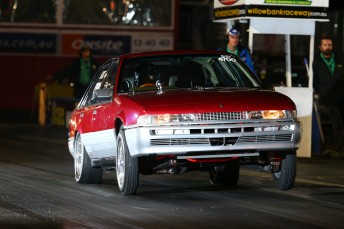 As the current Queensland Drag Racing Championship leader for the Super Street bracket, you can be assured that East Ipswich’s Andrew Stathis is not ready to let anything get in the way of his 2014 season – not even a bout with glandular fever.

Stathis has been laid up with the illness for a number of weeks, but now feels ready to get back on track for round three of the QDRC at Willowbank Raceway this Saturday, May 17 to defend his title lead.

“Having been out of action for a couple of weeks I finally got a chance to test at the weekend, so hopefully I’m not going to be too rusty for round three of the QDRC!” said the 39 year old machine operator of East Ipswich.

“So far the season is going quite well for me and I want to keep that rolling – in round one I was just itching to get on-track and I went on and claimed the round win, while in round two I certainly felt the pressure to repeat that success and blew it by jumping the start and red-lit by just 0.004 seconds which was absolutely heart-breaking.

“Now I head to round three looking to make amends for that mistake and further establish my title lead with some good results.

“At the end of the day though, I just want to have fun racing, so to win a championship would be a bonus and a real dream come true.”

Further inspiring the racer is the fact that he recently took eight years off from the sport he loves, leaving the mechanic by trade who has been racing on and off since 1993 eager to make up for lost time in his first full season back on-track.

“I really have to thank Dennis Ryan, Alan Woods and Steve Brown for all of their help getting me back in the driver’s seat after the eight year break,” said Stathis, who fields a VL Calais with a Holden 355 Stroker engine in the Super Street bracket.

“There are some fantastic competitors in the QDRC and to be able to run amongst them is a thrill for me after so long away from the sport, and with the recent changes by Willowbank to the seeding format and the re-badging of the championship things really seem to have an excitement around them too.

“As my home-track and just around the corner, I definitely have a soft spot for Willowbank  and I can’t encourage the fans enough to come out and check out some non-stop bracket racing this Saturday, it is a great day out.”

Joining Stathis and his fellow Prime Signs/Speed Elec Super Street competitors on track for this Saturday’s  QDRC round will be competitors across the QDRC SuperComp, QDRC Comp Bike, Donnelly Blasting Services QDRC Outlaws, Knijff Earthmoving Modified, Powercruise Super Sedan, Modified Bike, Junior Dragster and Super Gas categories. Gates will open at 7.00am with qualifying from 9.00am to 1.00pm and all racing from 1.00pm.

Entries are available online at www.willowbankraceway.com.au and will close at 5.00pm on Wednesday 14 May 2014, while spectator entry is available at the gate at just $20 for adults and $18 for students with ID, and children aged 13 and under gain free entry. For full event information, please visit www.willowbankraceway.com.auThis weekend’s QDRC event will be the last competitive hit-out on track at Willowbank Raceway before the largest championship drag racing event held outside of the USA – the FUCHS Winternationals – kicks off at Queensland’s premier drag racing facility acrossThursday 5 June to Sunday 8 June. Before it does, competitors in the event will have a chance to participate in the official Winters Warm-Up, held across Saturday 31 May and Sunday 1 June. For all the info on the FUCHS Winternationals, please click here.