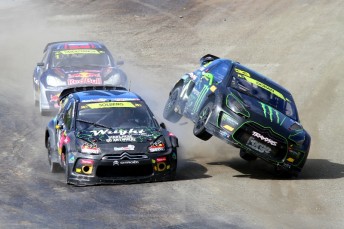 The FIA World Rallycross Championship presented by Monster Energy is delighted to announce a new partnership with iON Action Cameras.

Utilising highly advanced technology, iON Cameras will be able to capture thrilling in-car race footage and behind the scenes action, bringing fans closer to the extreme nature of the sport than ever before.

“There’s a lot of synergy between iON Cameras and World RX because we both believe in giving fans access to amazing content in an extreme sporting context.  It makes perfect sense, therefore, to create a partnership to help bring the fans even better access to our unique sport, which I firmly believe is the most exciting form of motorsport on offer around the world right now.”

Anayi added: “The iON Cameras brand is at the top in terms of the technology and its product range so we are thrilled to have them as a partner. They are innovating, growing and pushing the boundaries all the time so the product fits our target audience extremely well. In addition, having iON Cameras come on as our official partner on the new Spotters’ Tower means that fans will get even closer insight into the team aspect of the sport than ever before.”

Giovanni Tomaselli, CEO at iON America LLC, echoed Anayi’s sentiments: “Both World RX and iON Cameras are undergoing a significant period of growth and we felt that a partnership would be mutually beneficial.  We firmly believe that iON Cameras can help enhance a TV product that is already appealing to broadcasters across the world.  The technology behind iON Cameras is perfectly suited for World RX and we’re very much looking forward to our product being the Official Action Camera of the FIA’s newest World Championship.”

The all-new FIA World Rallycross Championship will kick off with the season-opening round at Montalegre in Portugal (3-4 May).