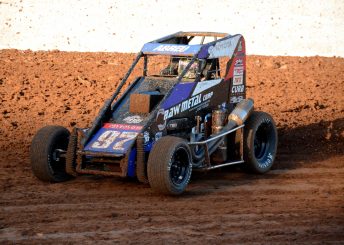 MEDIA RELEASE: After the opening night of competition in the Kratzmann Caravans 2016/2017 Australian Midget/Speedcar Championship at Ausdeck Patios Archerfield Speedway on Friday night (February 3), it is the international contingent who lead the way, with California’s Rico Abreu sitting atop the championship standings after three rounds of qualifying heats. With two heat wins and a runner-up result in the other, Abreu sits five points clear of New Zealand’s defending champion Michael Pickens who, after finishing second in his opening two heats, finished the night with a brilliant drive to victory in his final outing. Another Kiwi in Hayden Williams is third overall, while Nathan Smee is the best of the Aussies in fourth, followed by two more American hotshoes in Zach Daum and Brady Bacon.

The NSW-based pair of Matt Smith and four-time champion Adam Clarke are equal seventh, with Anthony Chaffey next best as the highest placed of the locals. Western Australia’s Dayne Kingshott rounds out the top ten ahead of Michael Stewart and two more Americans in Alex Bright and Andrew Felker.

A 41-car field fronted for competition and it was Smee who got things underway when he cleaned up in the opening heat, leading Bright and Bacon to the line.

Having inherited a pole position start when Lee Redmond headed infield before the race got underway, Chaffey took maximum advantage to lead home Abreu, who advanced from the back of the grid, with Brad Mosen third.

Daum downed Pickens and Michael Stewart in heat three, with Williams striking in heat four to finish ahead of Troy Ware and Felker.

Smith sailed home in heat five to down Chris Gwilliam and Chaffey before Abreu snared the first of his two wins when he outpaced Mosen and Kingshott in heat six.

Williams doubled up in heat seven to down Pickens and Felker, while heat eight fell in favour of Clarke over Scott Farmer and Whittaker.

The racing through the first two rounds of heats was somewhat tame by Midgets standards, but things heated up in the final rounds and perhaps some insight into how things might pan out tonight.

Heat nine saw Smee cement his place as the best of the Aussies with another win, this time over Michael Stewart who, after an early spin, stormed back through the field to snatch second spot from Smith on the final lap.

In a remarkable performance, Abreu took less than two laps to advance from position nine to the lead in heat ten before clearing away to win with ease ahead of Kingshott and Michael Harders, who bounced back after crashing out of his opening heat.

Bacon was even more impressive in heat eleven, finishing more than six seconds clear of Brock Dean and Troy Jenkins.

The final heat of the night was also the best with Pickens pouncing on the final lap to usurp Daum from the lead after the pair had swapped spots on more than one occasion. Further back, Bright surged from the deep in the field to grab third late in the race.

Kurt Wilson held on from fast-finishing Kirsty Kelly to win the Lightning Sprint feature race. Improving with each outing throughput the night, Jason Rae climbed to third ahead of American Ty Tilton, with Darren Baldwin and Andrew Sparks the only other finishers. It was Wilson, Kirsty Kelly and Aaron Kelly who shared the heat wins.