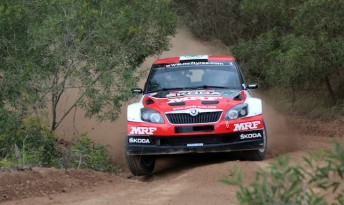 Junior World Champion Pontus Tidemand of Sweden and his ‘works’ Skoda rally car will turn out at the Coates Hire Ceremonial Start before the rally action kicks off. pic: APSM.tv

MEDIA RELEASE: rallying – The fastest drivers from at least eight countries will line up with their cars to meet fans in the main street of Caloundra for a festive evening start to the International Rally of Queensland next month.

Bulcock Street, one of the Sunshine Coast’s busiest shopping thoroughfares, will be closed to normal traffic between Nutley and Minchinton Streets as up to 80 rally cars are displayed for the public.

Drivers and co-drivers will sign autographs, pose for ‘selfie’ photographs and give away free souvenir rally posters before being flagged on their way in a traditional cross-the-ramp start ceremony.

Competitive action starts at 7.30 the next morning in the hinterland town of Kenilworth, with crews facing a tough challenge over two days, 230 kilometres and 18 stages of gravel roads in the Imbil State Forest in the Mary Valley.

Tickets priced from $30 for an adult day pass to multiple spectator points are available now at www.rallyqueensland.com.au. They also will be for sale at the Coates Hire Rally Show, at spectator point entry gates and at the Imbil Showground competitor service park.

The International Rally of Queensland hosts Round 3 of the 2015 FIA Asia Pacific Rally Championship, one of the world’s top regional rally series. It attracts representatives from Sweden, India, France, New Caledonia, New Zealand, Japan and Indonesia to challenge the best Australian drivers.

A street party will entertain Imbil vsitors on Saturday night and the rally will finish with a podium ceremony at the Showgrounds service park on Sunday afternoon.

Big crowds traditionally turn out for the Ceremonial Start, which was staged last year at Kings Beach Park.

“With the help of the Caloundra Chamber of Commerce we hope this will be a popular move for all,” Mr Woodward said.

The start party will complete a busy week of preparations that bring significant economic benefit to the coast. The first of an estimated 2000 visiting drivers, team members, supporters and families, officials and media arrive up to a week before the rally.

Many stay at rally headquarters at Caloundra’s Oaks Oasis Resort, where crews set up temporary garages in the car parks.

This year is the seventh on the Sunshine Coast for the FIA Asia Pacific Rally Championship, which also visits China, Japan, India, Malaysia, New Zealand and New Caledonia.

The International Rally of Queensland, under various names, has been staged since 1968 by the Brisbane Sporting Car Club.

It is supported through Tourism and Events Queensland’s Regional Development Program as part of a growing calendar of events across the State.

The International Rally of Queensland also is supported by the Sunshine Coast Regional Council.