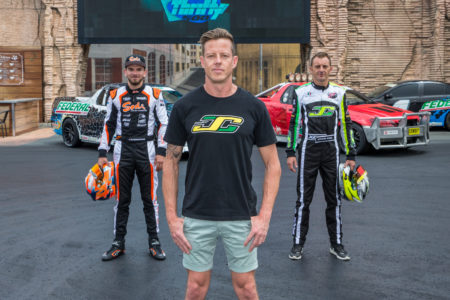 The Italian and Frenchman are in Australia for this weekend’s Race of Stars International karting event that is being held at the Xtreme Karting Complex in Pimpama, starting tomorrow.

Ahead of the racing, they were guests of the Hollywood Stunt Driver Show at Movie World where they got to experience first hand one of the Gold Coast’s most popular tourist attractions.

Forè, a five-time World Karting Champion, will be driving for the James Courtney team at the weekend’s event – a partnership that sees the two former team-mates from the nineties re-unite.

“I’m very excited to be back in Australia. I like very much to be in this beautiful country and I really enjoy racing at this circuit on the Gold Coast,” said Fore.

“I want to really thank James Courtney, Jon Targett and Raelene (Hopper) of JC Karts for the invitation and make it possible for me to race here once again.

“I really enjoy this track, it is the fastest karting track in the world and I’m looking forward to being a part of a great event again this weekend.

“The competition here in Australia is very tough, I’ve won this event two times and I’ll be trying to do my best and win again this weekend.”

For Courtney, his involvement in running the JC Kart team is a way of contributing to the sport that he has enjoyed so much.

“When I was a youngster racing karts, the European drivers were almost like gods to us. Davide was my team-mate when I was based in Europe and won two World Karting Championships, so for him to now drive for my team is pretty special,” said Courtney.

“I’m looking forward to seeing him aboard a JC Kart when practice starts tomorrow.

“The JC Kart team is my way of giving something back to the sport that has provided me with so much over the years and opened up the opportunities for me in my career.

“This weekend is going to be a great showcase for the sport of karting here on the Gold Coast.”

Abbasse is the defending Race of Stars Champion and is excited to be back in Australia and on the Gold Coast.

“It’s great to be back on the Gold Coast, last year was an amazing experience and I’m very excited to be back here,” said Abbasse.

“This morning I woke up and was able to go for a run down the beach and enjoy a nice breakfast overlooking the ocean and now to get the experience at Movie World is fantastic.

“I have a lot of respect for Davide, he is an amazing driver and I think he will be tough to beat this weekend but there are also some great Australian drivers here as well.”

Like his European counterpart, Abbasse was full of praise for the Race of Stars event and the circuit layout.

“I love the speed of the first corner here. The speed is just amazing, you really need to have a perfect kart set up doing such high speeds and then you have a big braking area for turn two,” said Abbasse.

“The atmosphere in the pit area is different to Europe, it is a little more relaxed.”

No less than six countries are represented among the entry list of more than 220 drivers in the seven categories of competition. This high calibre of competitor ensures this year’s event will be the biggest yet, with top level drivers from all around the globe set to be on the grid alongside of Australia’s best young steerers.

These drivers will reach speeds in excess of 160 km/h around the 1600-metre circuit in the world-class karting equipment.

Practice for the event begins tomorrow with qualifying and the heat races on Friday ahead of the finals on Saturday. The Xtreme Karting Complex is located on Pimpama Jacobs Well Road, PIMPAMA. Admission is free for spectators.

All of the the action from Saturday’s final day will be streamed live across the internet through the Karting Australia and Race of Stars Facebook pages along with www.karting.net.au