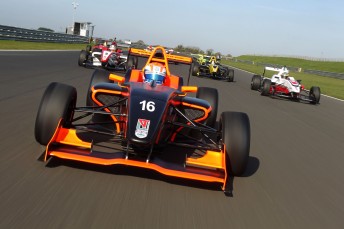 The second season of the BRDC F4 Championship blasts into life on the Silverstone Grand Prix circuit this weekend (26-27 April) with a grid of more than 20 talented young hopefuls aiming to emulate inaugural champion Jake Hughes.

Drivers from across the world have flocked to F4 pre-season, with 12 nationalities represented in this season’s line-up, all fighting it out to become this year’s champion and earn a prize GP3 test in Abu Dhabi with the Arden International team.

Eight of those contenders are British, with Struan Moore and Sennan Fielding returning for another season while Winter Championship race-winner Will Palmer embarks on a full season challenge, partnering Fielding at HHC Motorsport. Moore has switched to champions Lanan Racing and was fastest in last week’s pre-season test at Snetterton:

“We’re looking really strong going into the first round, we’re at the front and that’s where we want to be” he commented. “The team have done a great job, I’m feeling very confident and very comfortable going to the first round and I’m hoping to achieve the best we can after all the work we have done. We’re the best prepared we can be.”

British newcomers include the highly-rated George Russell, who after claiming 13 karting titles in five years, including a double CIK-FIA European crown, makes the step up to cars this year partnering Moore at Lanan.

2013 McLaren Autosport BRDC Award finalist and Formula Renault BARC champion Chris Middlehurst has made the switch to F4 with Mark Godwin Racing and will partner Scottish driver David Wagner, who returns to racing after a year out in 2013. Ginetta Junior graduate Tom Jackson will race with Chris Dittmann Racing, while Jordan Albert, who lives a stone’s throw away in Silverstone Village, makes his F4 debut with Sean Walkinshaw Racing having competed in Formula Ford 1600, Mazdas and Fun Cup last year.

The international drivers are headed by South Africa’s Raoul Hyman, who returns for a second season having finished seventh overall in F4 last year, and was second quickest in the Snetterton test. He’s aiming for a maiden win and title charge with HHC Motorsport and says: “We’ve had a good off-season, and we’ve done a lot of preparation both at the track and away from it. You can’t read too much into pre-season testing form but it’s nice to be at the front and the aim is to win the championship and take as many race wins as possible.”

After picking up maiden podiums in 2013, Diego Menchaca (Douglas Motorsport), Falco Wauer (Enigma Motorsport) and Gustavo Lima (Hillspeed) have set their sights on victories for their new teams, while Malaysia’s Rahul Mayer is optimistic of challenging for regular podium honours after a promising first season in 2013.

F4 will again feature 24 races throughout the season with prestigious support slots at the Blancpain GT Sprint Series at Brands Hatch in May, as well as on the British F3 and GT bill at Snetterton in June and Brands Hatch in August. Highlights from all the rounds will again be broadcast on ITV4 and ITV4 HD the weekend after each round, as well as an additional midweek repeat.

All the action from this weekend’s season opener, including live timing and text updates will be available on the official championship website www.formula4.com.