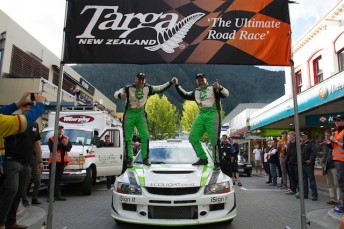 Glenn Inkster from Pukekohe and Spencer Winn from Auckland have won the 20th anniversary Targa South Island event in their Ecolight Mitsubishi Evo.

Glenn Inkster and Spencer Winn have won the 20th anniversary Targa South Island, the Pukekohe pair arriving at the finish line in downtown Queenstown this evening (Sat Nov 01) with a lead of eight minutes and 10 seconds over fellow Mitsubishi Evo pair Todd and Rhys Bawden.

Of the 26 stages confirmed at the Queenstown finish Inkster and Winn won their class – Instra.com Allcomers 4WD – in 20.

Five-time former winner Tony Quinn and co-driver Naomi Tillett won three in Quinn’s new Lamborghini but only contested three of the event’s six days thanks to a high-speed crash at the end of the second day.

Expat Kiwi Gavin Riches and American wife Amy were also far and away the quickest combination in their Porsche GT3 Cup Car in the Instra.com Allcomers 4WD class, claiming class honours in 23 of the 26 stages.

But a holed exhaust and subsequent engine bay fire in the Catlins stage at the end of the third leg on Thursday saw them tumble down the class and overall standings. And only a super-human effort by the talented Riches on the final two legs saw them rise back from 14th to fourth in class.

At the finish line former gravel rally ace Glen Inkster reckoned he was more relieved than anything else, having finally won the event after five years trying.

“Monday and Tuesday seem such a long time ago now,” he said. “And to be honest, we’ve been pretty tame and safe all event.”

A slipping clutch had the Targa event’s 20th winner worried this morning.

But really, ” he said, “it was a tiny problem and I think we were beating ourselves up for no reason. The guys did a great job all week in keeping the car going.”

Inkster said that of all the stages in this years’ South Island event he liked the repeated ones best, in particular, today’s run over the Crown Range and Thursday’s through George King Memorial Drive south-west of Dunedin.

“I love doing stages twice,” he said, “the second time is always a little more faster.”

Having won the 20th anniversary Targa Tasmania event in Australia, five-time New Zealand event winner Tony Quinn, had his heart set on getting the double here this year. But it was not to be, despite his investment in the latest Lamborghini supercar, the Huracan.

Though disappointed the Gold Coast-based Scot was philosophical, saying;

“It’s what Targa is, full of stories, dilemmas and stuff that happens.”

“We’re quite happy with the car….there are a few things that need doing to it and it will be fine.”

“It’s a very low car so you can’t see over the brows. Whether it’s the right car for the Targa I’m not sure. I may be better with another car and keep this one for the track, we have that option.”

The big drama on the final day of the event, meanwhile, occurred in the Metalman Classic 2WD class, though it did not affect winning son and father pair Mark and Chris Kirk-Burnnand from Wellington.

This year’s field was the most competitive ever – with six different stage winners – but the Kirk-Burnnands won their class on nine of the 26 stages, crossing the finish line in their BMW M3 over two-and-a-half minutes in front of provisional second place-getters Rob Ryan and Paul Burborough.

The final results of the Metalman Classic 2WD class remained provisional at event end, however, after Ryan and Burborough crashed on the final stage. If the results of that stage are included they will slip down the order, if not, they may retain the second place they held heading into the stage.

Third place in the provisional standings is the BMW 325i of Bruce Farley and Tim Eddington, but fourth could also change, as Carl Kirk-Burnnand and co-driver Scott Hay crashed their BMW 325i out of the event on the second to last stage.

With Gavin and Amy Riches out of overall event contention after their problem in the Catlins stage on Thursday, last year’s Instra.com Modern 2WD class and overall event winners Martin Dippie and Jona Grant were perfectly placed to take over in their Porsche GT3, taking line honours by a margin of almost five minutes from Christchurch rally pair Dean Buist and Andrew Bulman in a Ford Escort RS1800.

Third was Terry May and Peter Burridge in another one of the Porsche GT3s in the field, fourth the Riches after their giant-killing final two days – where they were fastest overall in several stages – in their similar, but track-based GT3 Cup car.

As well as winning their class, Dippie and Grant enjoyed the distinction of being the first resident South Island pair home.

“We’re very pleased, ” he said. “The car has gone like a freight train, no issues at all.”

“We did have one moment on the Crown Range today where we gave ourselves a wee fright, but that’s racing.

Dippie said that there were so many highlights on his ‘home’ event he found it difficult picking out one or two for special mention.

“Catlins for me has been the best stage, and the Crown Range has been awesome. They whole thing has been tremendous, a lovely part of the country, beautiful flowing roads.

“The pace and the driving this year has been fantastic, it is up a notch. It’s been a very good event.

This year’s 20th anniversary Targa South Island event consisted of a total of 768.7 kms of closed special stages and 1,888.0km of transport stages linking them.

The event attracted over 120 entries across three competitive classes and close to 80 in the concurrent but non-competitive Targa Tour.