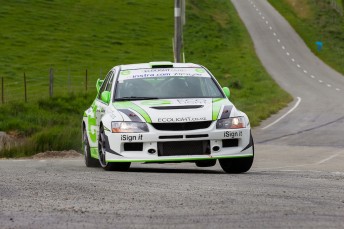 Within sight of the finish line of the fifth of six of today’s stages however, Quinn lost control of the Lamborghini and crashed. Neither he nor Tillett were injured, but the pair were forced to miss the sixth stage (there was also a seventh but it was cancelled due to the condition of the road) dropping them down to 13th in class and leaving a questin mark over their continuing in the event.

By winning all six stages Inkster and Winn arrived at the first overall stop of the event in Dunedin this evening with a lead of just over a minute and three quarters in class from Gill and Robinson but just under a minute and a half overall from the first day leader of the Instra.com modern 2WD class, US-based Kiwi husband and wife pair Gavin and Amy Riches in their Porsche GT3, who are second overall. 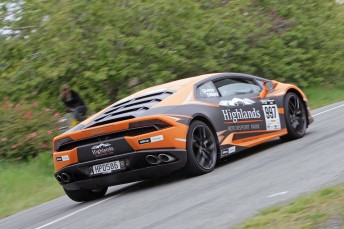 “It’s a good start,” Inkster said ,”but we just have to keep going.”

Auckland all-rounder Clark Proctor and his former event champion co-driver Sue O’Neill topped the Instra.com modern 2WD class on the first and second stages west of Timaru in the morning in Proctor’s hybrid Nissan V6-turbo-engined Ford Escort, but the Riches won the next four from Proctor and O’Neill with last year’s Targa event winners Martin Dippie and Jona Grant from Dunedin in their Porsche GT3 ending up third for the day.

The big story, meanwhile, in the Metalman Classic 2WD class was the speed and finesse of father and son pair Greg and Michael Goudie from Auckland in Goudie’s recently completed Mk 1 Ford Escort RS 1600.

For the first time in many year’s defending class title holder Barry Kirk-Burnnand and co-driver Dave O’Carroll found themselves disputing 10th place as Goudie and fellow Aucklanders Neil Tolich and Cully Paterson went Ford against Ford with the Goudie’s in Tolich’s Ford Capri Perana V8 for first and second.

The Goudies won their class in three stages, Tolich and Paterson two, with the other going to Wellington-based son-and-father pair Mark and Chris Kirk-Burnnand making up for a slow start to the event thanks to throwing a fan belt on the first stage.

In the overall class standings, the Fords of Goudie and Tolich, and the BMW M3 of the Kirk-Burnnands was split by the Ford Mustang of former motorcycle ace Jason Easton and his co-driver Campbell Ward

All told, just on 200 entrants will contest 807kms over 34 closed special stages linked by 1828km of open road transport stages.

The event continues with more stage in North Otago and South Canterbury tomorrow before heading south to Invercargill on Thursday and Cromwell on Friday before a final day in and around Queenstown on Saturday.