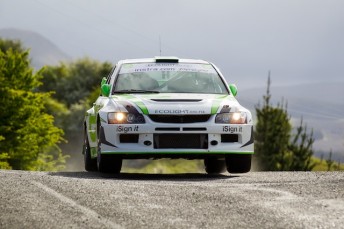 The Mitsubishi Evo8 pair from Pukekohe had a scare at the end of the first timed day in Dunedin on Tuesday when overheating issues forced an overnight head gasket change.

On Tuesday they were run close by fellow Mitsubishi pair Jason Gill and Mark Robinson and Subaru duo Leigh Hopper and Simon Kirkpatrick.

But a high-speed off in the final stage on Tuesday saw Hopper and Kirkpatrick follow five-time former event champion Tony Quinn and his co-driver Naomi Tillett into retirement before the start of the second leg this morning.

Gill and Robinson, meanwhile, were forced to miss four of the seven stages this morning after blowing an oil pressure sensor on their Evo 9’s motor and having to wait while a replacement was found and fitted.

High-profile Instra.com Modern 2WD classic entrant Clark Proctor and co-driver Sue O’Neill were also in the wars, Proctor rolling his Nissan V6 turbo-engined Escort but getting going again in the first stage of the day over Mt Cargill north of Dunedin, then slipping to 17th in class after gearbox problems in the repeat of the Windsor/Tokarahi and Duntroon/Ngapara morning stages west of Oamaru in the afternoon.

The result was that when the field arrived back in Dunedin Inkster and Winn had extended their overall lead over Instra.com Modern 2WD class leaders Gavin and Amy Riches to almost two-and-a-half minutes and their lead in the Instra.com Allcomers 4WD drive class to over four-and-a-half minutes from fellow former gravel rally front-runner Todd and brother Rhys Bawden from Hamilton in a Mitsubishi Evo 10.

Normal service was also resumed, today, in the Metalman Classic 2WD class with Mark and Chris Kirk-Bernnand coming back from a Leg one start slowed when they threw a fan belt to win their class in three of the seven stages and take over the class lead after day one pace-setter Greg and co-driving son Michael Goudie struck problems with their Escort BDA.

Auckland pair Rob Ryan and Paul Burborough also had a good day in their Toyota AE86, the pair topping the class time sheets in the first two stages and ending the day second to the Kirk-Burnnands just 10 seconds behind with former motorcycle ace Jason Easton and co-driver Campbell Ward just six seconds back in third.

This is Easton’s debut event as a driver after three years’ co-driving for fellow Foxton man Bevan Claridge and so far the former motorcycle racer has been the revelation of the class in his only recently finished 1965 Ford Mustang.

Defending Targa winner Martin Dippie and co-driver Jona Grant also edged forward in the order in their Porsche 911 GT3, claiming their first Instra.co 2WD class stage win in the second stage and ending the day seocnd to the similar but more developed GT3 Porsche of the Riches.

Late in the day the local rescue helicopter was called to an accident in Stage 14. The driver of the car was airlifted to hospital with leg injuries.

All told, just on 200 entrants will contest 807kms over 34 closed special stages linked by 1828km of open road transport stages on this year’s inaugural Targa South Island event which continues with more stages tomorrow this time in and around Dunedin in the morning.

After a service park and lunch at Milton the field then heads south to Invercargill in the afternoon then to Cromwell on Friday before a final day in and around Queenstown on Saturday.