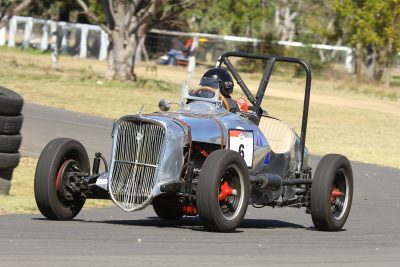 When the Historic Leyburn Sprints roars into action next weekend it will celebrate not only the time the Darling Downs village hosted the Australian Grand Prix but also the ingenious home-built cars that helped revive Australian motor-racing after World War 2.

The entry list of 28 cars at the 1949 grand prix included 19 described as “Specials” – either roadgoing models lightened of superfluous bodywork or ground-up creations using combinations of secondhand parts. Their expensive imported rivals included two Bugattis, the winning Delahaye, a Jaguar and several MGs.

Virtually all the “Australian Specials” were constructed by enthusiasts with either limited funds or skills, but made up in speed what they lacked in style.

They became part of an engineering tradition that has continued for decades and will be remembered when around 20 cars that have been built as one-offs compete among a total entry of 210 in the weekend’s time-trials on the Leyburn 1.0 kilometre street course.

The star deserves to be the Strathpine Special, driven by John Parker, which is returning to Leyburn 69 years after it contested the Australian Grand Prix on an ex-airfield circuit just outside town. Although entered as a 1935 model, the Strathpine Special’s vintage is believed to refer to its Ford V8 engine while the car is understood to have been built post-war, as it incorporated Jeep parts.

Its builder Snow Sefton helped in 1946 to found the Strathpine circuit, another ex-airfield venue on the northern outskirts of Brisbane where many Specials competed.

Typical of the creativity of special builders is the Wolseley-powered 1954 single-seater nick-named the Flying W. Owner Eric Cossiche is bringing the car from South Australia for its Leyburn debut, but it will be a homecoming of sorts as it started life in Beaudesert, south of Brisbane.

The prominent ‘W’ on the car’s radiator grille was copied from an inverted Matchless motorcycle badge of the time. The six-cylinder motor was retrieved from a wreck, the gearbox came from a Singer, chassis from a T-Model Ford and front suspension from a Lancia Lambda.

Teenagers Brian and Rob Fechner and their friend Len Henderson built the Wolseley Special and found it competitive against contemporary factory-built racers.

Other Australian Specials on track will include the 1935 Ford of Peter Trapnell, 1936 Ford of Barry Smith and the 1957, 1958 and 1963 Holden-powered cars of John Devitt, Paul Budden and Jason Wingett.

Every one and many others at Leyburn tells a similar story of how enthusiasts, using imagination, secondhand parts and only relatively little money to fufil their need for speed, helped postwar racing get back on its wheels.

The community-run Historic Leyburn Sprints, Queensland 2017 Motor Sport Event of the Year, will run next Saturday and Sunday, with competition from 8am each day. Gates open at 6.30am and adult tickets are $20 a day or $30 for the weekend; accompanied children under 14 enter free.