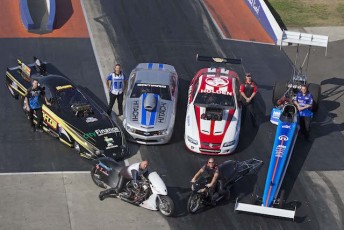 MEDIA RELEASE: Australia’s new professional drag racing series, 400 Thunder has attracted bumper fields to its inaugural round, the East Coast Nationals, which will be held at Sydney Dragway on 7-8 November.

McClenathan is a four-time NHRA Top Fuel championship runner-up and two-time U.S. Nationals winner with 65 national event victories in the world’s premier drag racing series to his credit. He won Australia’s biggest annual drag racing event, the Winternationals at Willowbank in June, in his last appearance for the team.

“I got the call from [team owner Santo Rapisarda’s son] Santo Junior a few weeks ago and I was very happy to hear about the race and asked if I could come down and drive one of the Rapisarda Autosport International dragsters,” McClenathan said. 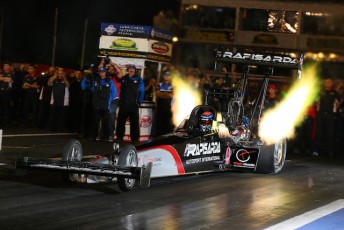 Every Australian state and territory will be represented at 400 Thunder’s opening round, the East Coast Nationals

“I’m very excited to run with three other team mates. They are all great drivers so it should be a blast. I’m also looking forward to working with [renowned American crew chief] Lee Beard and seeing all the Rapisarda family. I enjoy the fans in Australia, they’re some of the best in the world.”

An exciting mixture of 12 Top Alcohol cars has nominated for the event; eight Funny Cars, three dragsters and a solo altered – the field headlined by 17-time Australian Top Alcohol champ Gary Phillips and fellow Queenslander John Canulli, who endured a 400km/h fireball when he went close to wrestling the title off Phillips last season and is now back and determined to turn the tables on his rival this season.

Former NHRA Pro Stock driver, Grace Porter (nee Howell) is the lone female competitor in the professional ranks, the 29-year-old who is now based in Queensland will drive husband Scott’s Ford Mustang.

A national champion in Junior Dragsters, Porter made her NHRA professional debut at the 2011 U.S. Nationals with Cunningham Motorsports, and three times qualified for eliminations in the sport’s most competitive category.

“400 Thunder set out to make drag racing more competitor, corporate and media friendly, and to have more than 60 professional teams enter its inaugural event is confirmation we have taken right direction with the new series,” Beaumont said.

“The new series is centred around a more comprehensive broadcast package and greater competitor representation in decision making, and our new formula is already proving to be a winner.

“With such strong competitor support for the East Coast Nationals, race fans will be in for an incredible two days racing at Sydney Dragway.”

A new broadcast arrangement with Fox Sports has already been announced for 400 Thunder, while an exciting new live-streaming package will be revealed in the lead up to the event.

In addition to 400 Thunder’s six professional categories, the East Coast Nationals will include the second round of the Summit Racing Equipment Sportsman Series.

The East Coast Nationals takes place at Sydney Dragway from 7-8 November, with qualifying and racing from 9:00am both days.

Further event information and ticket prices can be found at www.sydneydragway.com.au.