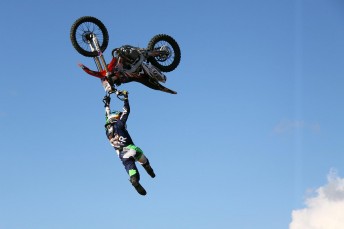 MEDIA RELEASE: New spectator facilities and a spectacular line-up of entertainment are just some of the initiatives aimed at improving the experience for spectators at the 2016 Motul, Pirelli Troy Bayliss Classic presented by Insure My Ride, Garden Master and Shark Helmets at Taree Motorcycle Club on Saturday 16 January.

Headlining the entertainment is Australia’s longest-running freestyle motocross team – Showtime FMX, who will be appearing at the event for the first time.

Performing the latest tricks and biggest whips during three scheduled entertainment sessions throughout the day, riders Steve Mini and Harry Bink will also be on hand to meet and greet fans.

Excited to be performing at the iconic event, Steve Mini said he was looking forward to putting on a good show for the 6000 strong crowd..

“We can’t wait to get down to the Troy Bayliss Classic in Taree,” Mini said. “I have heard a lot about the event so I am really looking forward to being part of it.

“Nothing beats heading out to regional areas performing for great crowds and meeting fans.”

Event Organiser Troy Bayliss said he was thrilled to be bringing Australia’s most popular freestyle entertainment to Taree.

“Showtime FMX is the longest running FMX team in Australia, with riders who often perform in the world’s biggest contests and touring shows such as Red Bull X-Fighters, Nitro Circus and the Crusty Demons,” Bayliss explained.

“This event is about bringing together some of the best riders from all disciplines so it is fitting that we have the Showtime FMX team headline our entertainment.

As well as contesting the 2016 Troy Bayliss Classic Japanese flat-track sensation Masatoshi Ohmori will also perform his signature slide that has been viewed by over 500,000 people on YouTube.

“It is great to have Masatoshi Ohmori return to the Classic, the crowd get right behind him and his slide skills are incredible,” Bayliss continued.

“Masa will entertain the crowd during the sunset break in the evening, he also recently competed the Superprestigio event in Spain so I am sure he will be on the pace when it comes time to race.“

A brand new canteen has been built at the Taree Motorcycle Club affording staff quicker preparation time and a greater ability to serve customers during the busy event.

Other improvements aimed at enhancing the experience for event-goers include a new PA system and a 300 capacity temporary grandstand that will be located near the canteen. Tickets to the grandstand will cost $15.00 and will only be available for purchase on the day.

Visitors to the event will be able to browse a range of displays and due to public demand, this year’s Troy Bayliss Classic merchandise will include t-shirts, caps, and stubby coolers.

Tickets to the 2016 Motul, Pirelli Troy Bayliss Classic presented by Insure My Ride, Garden Master and Shark Helmets are on sale now via http://www.troybaylissevents.com/troy-bayliss-classic/

The event, which will be held at Taree Motorcycle Club on Saturday 16 January is also supported by Coates Hire and Ixon.