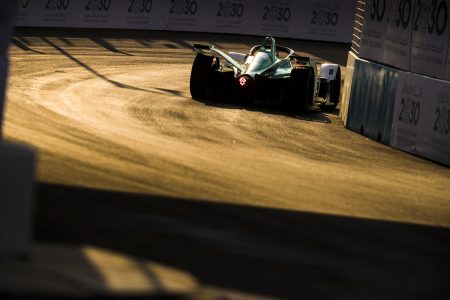 Hot on the heels of this past Saturday’s season-opening ABB FIA Formula E Championship race in Saudi Arabia, NIO remained at the Ad-Diriyah street circuit on Sunday, 16th December, for official testing with a three-driver line-up.

Alongside the team’s race drivers Oliver Turvey and Tom Dillmann, who finished 13th and 14th respectively in Saturday’s e-Prix, rising female British star Jamie Chadwick made her track debut and all three combined to deliver some strong development work for NIO.

Turvey was first on track in bright and dry conditions, focusing initially on strategy and set-up, before Chadwick and Dillmann took to the circuit. Turvey and Dillmann shared the former’s No.16 NIO 004 Gen-2 car with Chadwick running in the No.8 chassis.

Oliver Turvey, Race Driver, NIO Formula E Team:
“After the first race it is always great to be able to test, especially with a new car. We don’t get many opportunities to test on a street circuit so this time was really valuable We ran through our programme and tested various areas on the car where we felt we could improve and we gathered some valuable information. All of this helps with our preparation ahead of the next race in Marrakech.”

Tom Dillmann, Race Driver, NIO Formula E Team:
“The test was going well and we were running through our planned testing programme when I hit the wall in sector two and that ended my session with an hour to go. We were able to collect some valuable data and we will use that and continue our preparations for the next race.”

Jamie Chadwick, Test Driver, NIO Formula E Team:
“It was a fantastic experience. To be here at such an event, having spent the week here with the team, was great preparation and I have been itching to get out in the car. This is my first time on a street circuit and driving the Gen 2 car, and I loved every minute of it. I made improvements during the session and I would have liked a few more laps to be honest. I would like to say a huge thank you to Gérry [Hughes] and the team at NIO for giving me this opportunity, it goes without saying that I would love to be back behind the wheel.”

Gérry Hughes, Team Principal, NIO Formula E Team:
“We ran both cars today with Jamie in the No.8 and Oliver and Tom sharing the No.16. Jamie’s start to the test was delayed due to an issue with the car which we had to resolve before she was able to go out. She has made great progress throughout the day having completed in excess of 40 laps in what was her first time in the Gen 2 car and on a street circuit. She acclimatised herself well during a shortened programme accruing important mileage behind the wheel.

“On the other side of the garage Oliver kicked off the day in his own car and worked through a short test programme with Tom taking over driver duties this afternoon. Unfortunately, his run was cut short after an accident in sector two on one of his flying laps, so not as many lessons learned today as we would have liked but we will now focus our attention on Marrakech.”

Round two of the ABB FIA Formula E Championship season will take place on Saturday, 12th January 2019, in Marrakech, Morocco.