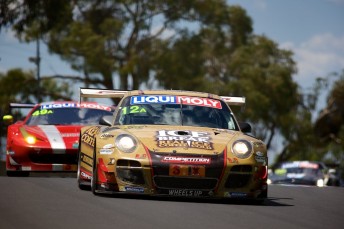 The team of Patrick Long, Chris Pither and David Calvert-Jones produced a consistent, race-long performance to survive the most competitive and arguably most incident-packed 12 Hour classic ever, recording 267 laps (1,658km) of the legendary Mount Panorama circuit – within two laps of the race winning team.

A spate of incidents and mechanical attrition drove a race record 20 Safety Car interventions – including two in the final 30 minutes – which contributed to a nail-biting finish to the race.

The team ran inside the top-10 for the majority of the race thereafter, and as high as seventh during Long and Pither’s stints.

Mid-race contact from a trailing Aston Martin damaged the car’s exhausts which created a horsepower deficit on the high-speed, 6.213km Mount Panorama circuit.

The unseeded Calvert-Jones (who earlier recorded an impressive 2:06.94 in the final lap of an excellent double stint) brought the car to the chequered flag in 11th position after an intense two-lap sprint to the flag, brought about by a Safety Car intervention for a stranded car at Murray’s Corner.

Patrick Long: “You focus on hitting your marks and sticking to a plan in races like this, and in general we did just that.

“We had an unlucky break getting hit from behind when there was a concertina at the Cutting during Chris’ stint, but the team worked their tails off and just put in an outstanding effort all day – and all weekend long.

“All in all we can be pleased with making it to the end of a race as gruelling as this. I must thank Ice Break for their valued support once again – they put in a mega undertaking into our campaign and we really appreciate that.”

Chris Pither: “It was an interesting weekend and the end result is probably not indicative of our genuine performance, but we had a few hurdles to overcome – the most significant being the damage sustained to the exhaust when I was hit from behind which had a considerable effect on engine horsepower. I really enjoyed getting some good stints under my belt which enabled me to feel comfortable in my first race in a GT car.

“We had a slightly conservative strategy early with single-stinting tyres whereas our competitors double-stinted, but it was justified based on punctures that the team had last year. It cost us a little bit of time but that’s all part of a race like this.

“I am really thankful to David, Bob and the Ice Break Competition Motorsports crew for having me and I would love to be back next year.”

David Calvert-Jones: “Staying out of trouble and to our plan was our objective. The damage to the exhaust had an effect along Mountain Straight and Conrod Straight, which made things tough in combat but on the whole the car was a joy to drive, especially in the earlier stint and it gave me so much confidence to lap very close to Pat and Chris’ pace.

Bob Faieta, Team Principal: “The race went to plan for us today – I can’t speak highly enough of Andy McElrea and his crew who supported us for the third year in a row. They never made one mistake in the pits and the drivers all did a really solid job.

I am also hugely grateful to Porsche and their engineering support this weekend, in the form of data engineer Andrew Gregory who joined our team this weekend – we could not ask for a better effort. The drivers all did a really solid job and we have genuine reason to be satisfied with our achievements here at Bathurst.”