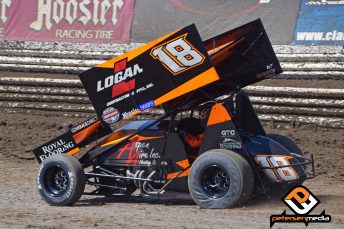 MEDIA RELEASE: Continuing his first trip to the state of Florida, Ian Madsen was pleased with how his team performed at Volusia Speedway Park as they recorded a pair of Top-10’s with the World of Outlaws.

“I thought we did pretty well for our first trip to Volusia Speedway Park,” Ian Madsen noted. “We had a ton of speed, but did struggle at times. I think I got more comfortable as the week went on, and we put some good finishes together to end the trip.”

Racing under Arctic Cat All Star Circuit of Champions sanction on Wednesday and Thursday night, Madsen would be forced to race his way into both feature events from the ‘B’ Main.

Getting the fourth and final transfer position during Wednesday night’s opener, Madsen would turn in a nice showing in the ‘A’ as he marched his way forward. Working by some stout competition, the St. Marys, NSW driver would race his way to a 15th place finish.

Coming out of the B Main again on Thursday night, Madsen would not be able to work his way as far forward as the track would take rubber on this night. Able to get a few spots in the early goings of the race, the Logan Contractors Supply Inc./Aspen Aire/Team Kline Electric machine would finish 18th.

Friday night brought on the season opening event with the World of Outlaws Craftsman Sprint Car Series and Madsen would come out swinging as he timed in sixth fastest in qualifying time trials before winning his heat race and finishing sixth in the Craftsman Club Dash.

With the racing surface extremely fast in the feature event, Madsen would find himself battling with older brother, Kerry, and Rico Abreu for quite a few laps before he finished 10th.

Saturday night would see rain cancel to program following time trials and create a double header situation on Sunday. During the day program, Madsen would time in 14th fastest in time trials and pocket a third place finish in his heat race.

With track crews doing all they could to keep the surface from taking rubber on a warm, sunny afternoon, Madsen would take the green flag from the 10th starting spot.

Again battling with his brother in the shorted feature event, Madsen would do what he could on the extremely slick surface, as he would end the day with a 13th place finish.

The final event of the busy week would take place just a few hours after the day show checkered flag flew. Timing in 12th quickest in qualifying time trials, Madsen would finish fourth in his heat race.

Taking the green flag from the 16th starting spot, Madsen would run a very patient race that saw him work his way through the field. Using a couple of late restarts to his advantage, Madsen would bring his weekend to a close with a nice run up to finish in the ninth spot.

“I was pleased to end our week with a couple of Top-10’s with the World of Outlaws,” Madsen added. “The field of cars that was in the pit area was probably one of the toughest fields we will see all year, and I was pleased with our performance. My guys worked hard all week, and their winter preparation really showed I thought.”

ON TAP: Madsen and the KCP Racing team will be back in the shop this week before they head to Texas with the World of Outlaws March 3rd and 4th.

PETERSEN MEDIA: Petersen Media is an agency that can handle your public relations, marketing, and any other promotional needs. Petersen Media utilizes multiple tactics to help you reach your intended audience, and boost awareness.