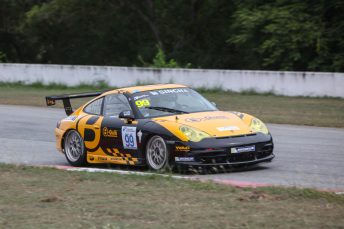 MEDIA RELEASE: B-Quik Racing is pleased to announce that Ian Ross Geekie, a very familiar name in Asian motorsport circles, will be joining the team during the 10th Anniversary Bangsaen Grand Prix next month to drive the second of our entries in Super Car GTC.

Ian will pilot the Porsche 996 GT3 Cup that was campaigned during the previous round of Thailand Super Series (held at Bira Circuit last September) by Thomas Raldorf and with Attapot Sriprom continuing in the sister car it means B-Quik will once again field a full strength lineup in Super Car GTC.

While this will be Ian’s first time to drive for B-Quik it will in fact be the Australian’s second time racing in Bangsaen having competed in the street race in 2012. He finished on the podium then and we expect him to be right in the hunt for the rostrum once again.

He certainly brings vast racing experience and plenty of success; he started racing back in 1993 at the wheel of a BMW 3.0 CSL as well as with Porsche’s equally legendary Turbo and 2.8RS. That early period included competing on the short lived Zhuhai Street Circuit while within just two years he was on the grid in Macau for the first time – so Ian’s certainly well versed at racing around the houses. In fact, five years ago he raced in the frenetic Colombo Night Street Race in Sri Lanka as well as making his first appearance in Bangsaen.

Ian is well known for racing and winning in classic cars and most recently that’s included the Asia Classic Car Challenge where he’s been pitted up against B-Quik’s drivers’ Henk J. Kiks and Daniel Bilski. He’s also contested the Sepang 12 Hours multiple times and that means Bangsaen is going to be something of a ‘reunion’ as he last drove a Porsche 996 GT3 Cup nine years ago in South East Asia’s most prestigious long distance race, then known as the Malaysia Merdeka Endurance Race (MMER). In fact, that was the third time he drove a 996 in MMER having finished fifth overall on his debut in 2006 and then on the podium in third place a year later. Ian also finished the Dubai 24 Hour the same year in a 996, so it’s a car he’s very familiar with.

Ian Ross Geekie: “I’m really excited to be returning to race at the iconic Bangsaen Street Circuit and to be able to do it with a great team like B-Quik Racing makes it even more special. I have to thank Henk and the team for this wonderful opportunity and I’m looking forward to getting behind the wheel of the B-Quik Porsche 996 GT3 Cup, a car with which I had success with in the past. Thailand Super Series has become one of the region’s leading championships and the Bangsaen event is the absolute highlight. To be a part of this event is amazing and I can’t wait to get started.”

Henk J. Kiks (Team Owner, B-Quik Racing): “We’re delighted to be able to put this together and get Ian into one of our entries in Super Car GTC, which was available for Bangsaen. We’ve known Ian very well for a long time both off track and fighting against him in Asia Classic Car Challenge where he’s always been a tough but fair rival. So it seems appropriate that he would end up driving for B-Quik and now we look forward to seeing just what he can achieve in Bangsaen with our 996; certainly we’re confident that he will be on the pace.”