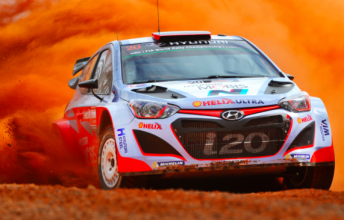 MEDIA RELEASE: Hyundai will renew its support as a major sponsor and official vehicle supplier to Kennards Hire Rally Australia, the closing round of this year’s FIA World Rally Championship.

The partnership announced today will see a range of Hyundai passenger vehicles in official use throughout the 17-20 November event on the New South Wales Coffs Coast.

“It’s great to have Hyundai Australia on board for a third year of Rally Australia,” he said.

“The drive that has pushed Hyundai products to the top of the Australian sales charts and achieved two wins for the Hyundai New Generation i20 WRC car in this season’s world championship will be welcome in helping the success of Kennards Hire Rally Australia.”

WRC breeds the best technology and a great spirit of competition. So, as we continue the development of the Hyundai brand, it is vital that we support this fantastic international series.

“We are proud of Hyundai Motorsport’s achievements with the New Generation i20 WRC car and we are also proud to sponsor the Australian round of the championship. We cannot wait to get to Coffs Harbour in November.”

Preparations for Kennards Hire Rally Australia are in the final weeks, with organisers putting finishing touches to plans for the new Destination NSW Super Special Stage beside Coffs Harbour plus a further 300 kilometres of challenging rural and forest rally roads.

Tickets on sale from Ticketek.com include a limited 2-for-1 offer on Super Special Stage entry.