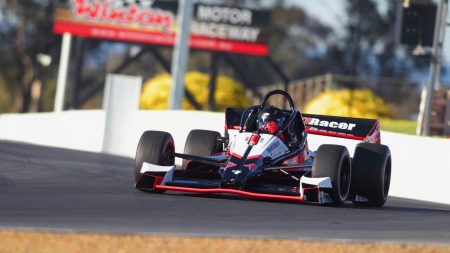 The test program, which commenced in May, will continue to explore the relationship between the front / rear wings and the ground effects tunnels and the effects of ride heights on downforce.

Tests so far have shown the car to be balanced and stable from day one, with adjustments to wing angles and spring pre-loads being the only adjustments made so far.

Design engineer, Dean Crooke, said “We were surprised that the car was so balanced straight off the bench. We were expecting we would be making some body/chassis modifications, but we have’t touched it.”

Hyper Racer is no stranger to ground effects, with co-designer and test driver Jon Crooke, having won the 1986 Australian Formula 2 Championship in the last season of the ground effects cars in Australia.

The Hyper X1 Racer will contest the Formula Libre Up To 1 Litre (FL1) class in the Australian Prototype Series.

Interest in the Hyper X1 Racer has been overwhelming and Hyper has commenced construction of cars 2 and 3 which will see action in 2020.