Hutchinson on the double at Daylesford

Hutchinson on the double at Daylesford 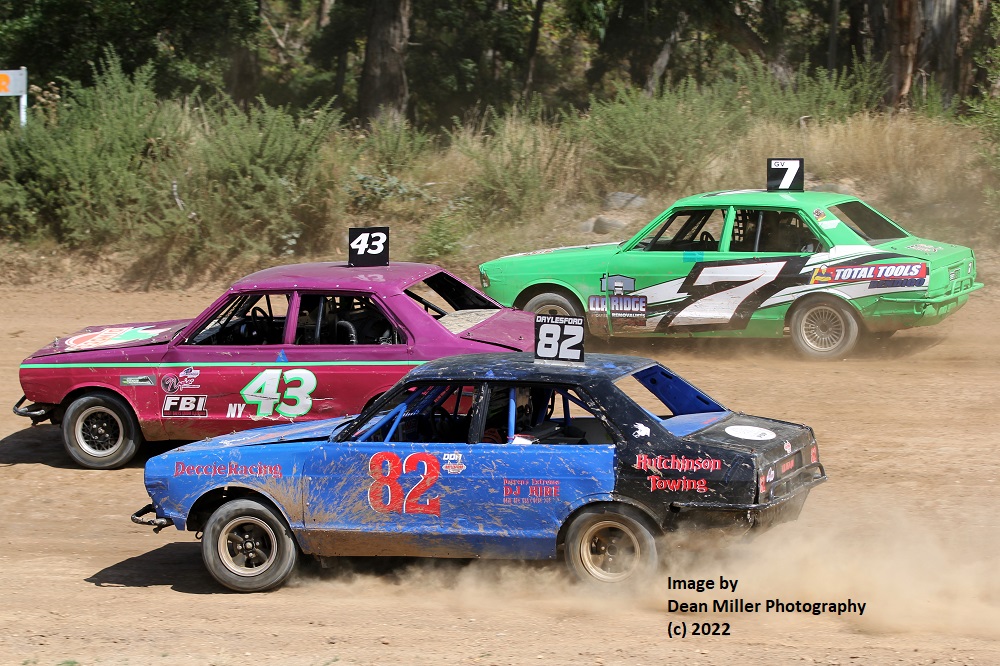 Daylesford Drivers Association held an enjoyable day of racing on Sunday at their picturesque venue cruising through almost the full complete day of racing before a serious and unfortunate crash involving Chloe Graham in Ladies Sedans put her in hospital. Prior to the accident Arthur Hutchinson the 1200cc Junior Sedan class won a major feature and his Uncle Tim Hutchinson won the Standard Saloons also.

The 1200cc Junior Sedans had great support from local woman Jasmine Molloy and each driver competed in three heats before the final race. Arthur Hutchinson won the first heat which included an unfortunate rollover for Dayne Murdoch. Riley Taylor won the second heat and Hutchinson the third where Murdoch re-appeared after adults got together and patched up the race car ready to go again. In the final Hutchinson and Riley Taylor had a great start before Connor Claridge and then Bryce Leek put themselves into the action. Hutchinson went on to win from Leek, Claridge, Riley Taylor and Ella Sheedy.

Mitch Viney and Chris Hay won Street Stocks heats each before Viney won a hard-fought battle to snatch the lead from Des Robinson in the final. Robinson the class champion at Daylesford almost kept Viney at bay, however once Viney hit the front he looked strong and secured a back-to-back result for himself at Daylesford having won the last event. Robinson finished second, Hay in third then Michael Smith and Steve Hardie.

In the Daylesford Ladies Sedans Katie Meyer won both the heat races and the final which was declared due to the crash to Graham. Meyer defeated Richelle Jenner, Jane Laidler, Charmaine Bryans, and Lizzi Huckel.

Bailey Kakoschke was another driver to win both heats and the final of their class when he did so in the Daylesford Junior Sedans. Kakoschke won the final from Blaize Majok-Edwards, Peyton Edwards-Daly, Chelsea Kakoschke and Ben Carrington.

Dean Spring and Tim Hutchinson shared heat race wins in the Standard Saloon class before they both went hammer and tong at it in the final. Hutchinson won from Spring, Rick Stowe, Pat Walsh, and Lachie Chivers.

The Modified Sedans final did not run due to the serious crash in the Ladies final. Ryan Daly, then Daniel Carter with two wins won the heat races. On points the overall win went to Carter from Daly then Jayden Humphrey, Wade Justice, and Reece Kakoschke.

The next event at Daylesford is April 17th that includes all Daylesford classes, Standard Saloons, Sports Sedans, SSA Junior Sedans Easter Cup and a Demolition Derby.