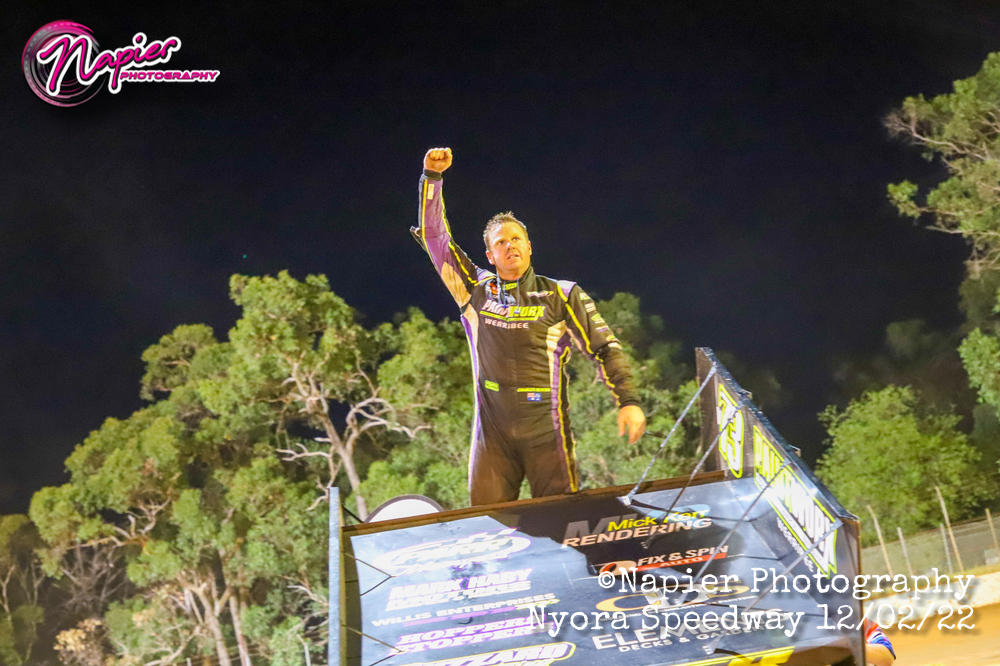 There could have been around 1500 to 2200 people around the Nyora facility enjoying all the action with V8 Supercar star Cameron Waters amongst the Sprintcar competitors drawing a crowd.

The All Star Sprintcars series started their racing with a timed lap session to determine heat race starting positions and it would be Cam Waters claiming the top spot and a largest points allocation for the session as a result when he timed in with 12.215 for a fastest lap. Jordan Abbott, Paul Solomon, Chris Campbell, and Travis Millar all were close behind with eleven race drivers recording below fourteen seconds on the clock.

In the feature event declared after numerous caution periods at twenty-three laps some of the earlier faster competitors such as Paul Solomon, Chris Campbell, and Jordan Abbott were amongst the drivers not to finish, Brett Smith crashed in front of the stewards stand landing upside down whilst Jordyn Charge who was ranking in the top four in the All Star Sprintcar series when the night started, also was a non-finisher.

For nineteen laps, Hunter led Hobson Charge and Smith before things went awry for Charge dropping down the field and then out of the race and then on lap twenty-three Smith caused the final stoppage when he crashed seeing the race declared with Hunter the winner from Hobson who hails from Clyde locally, Brad Warren who comes from Longwarry also a local racer, then Davis and Millar.

Seventeen drivers from Queensland, New South Wales and Victoria competed in the ‘R & K Alignments and Exhausts’ Australian Lightning Sprints national title with the eventual winner being New South Wales racer AJ McTaggart. McTaggart completed a three peat over four years which included a season with no national title due to Covid.

During the night McTaggart would set the fastest one lap time for the class with a 14.116 second lap and was the benchmark driver all night. Andrew Kimm from Queensland had a crazy night with ups and downs coming second in his first heat only to be disqualified when he failed to head to the scales directly after racing. He then finished second in his next heat when he was leading the race as the one lap to go flag unfurled and mistook it for the chequered flag and slowed to allow Pete Styles to win that race, before finishing second in his final heat without drama.

Lining up for the twenty-five-lap title race McTaggart, Graham, Michael Conway (VIC), Blatch, Jordan Binskin (NSW) and Styles were the top six starters. Blatch moved into third early as the race got underway. Binskin started well also moving into the top four with McTaggart leading the first ten laps with Graham in second. The next fourteen laps was more of the same until Blatch slid past Graham and into second.

When the chequered flag unfurled McTaggart was crowned Australian champion for the third time in succession with Blatch, Graham, Binskin and Conway rounding out the top five finishers.

In the Miles Cup for Standard Saloons supported by Miles Mechanical, Drouin based racer Bradley Hill was too good for a stellar line up that included Shane Stewart the Victorian champion who copped the wrath of the steward with a rear of the field penalty during the race and Chris Stewart the Victoria number two ranked racer whose car sustained heavy front end damage and left the race track whilst he was second in the race.

Despite challenges from Rhys Lansdown from Koo Wee Rup and Nick Chrystie from the Mornington Peninsula, Hill won from Chrystie, Lansdown, Wayne Sheerman and Mark Miles from Catani.

Nyora returns with another title on February the 26th when the Formula 500 class returns to compete at the venue.