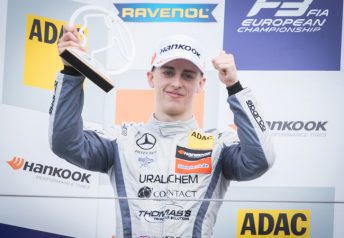 Just a short hop from the spectacular city of Budapest sits the Hungaroring circuit, littered with sharp turns and long straights it’s a track different to all others on the FIA Formula 3 calendar. Arriving back to the scene of the team’s first ever victory last year and boosted by Ralf’s podium finish last time out, the team were ready and raring to go for the fourth round of the 2017 championship.

With rain pouring down on the paddock on Friday morning, a damp track lay ahead for practice and qualifying. Showing his hand in the wet conditions, Jake posted the second fastest time in the early session, whilst the entire field went on to be split by less that a second in the final outing, leaving it all to play for in qualifying.

Spinning their wheels against the damp asphalt, the squad punched in their laps in a bid to clinch a good position for the first race of the weekend, at a track when overtaking is notoriously difficult. Jake’s pace carried through to place 3rd in a tantalisingly close session, whilst Ralf, Nikita and Tadasuke were all mere tenths away. With Mawson carrying a three-place penalty from the previous round, Jake moved to join Günther on the front row for race one.

With eyes focussed on his clean view ahead, Jake shot off the grid as the pack steamed into the first corner, muscling his way through he managed to fend off all challenge from behind and maintain 2nd place.

As the hungry young racers roared their way around the first lap, Ralf was caught out by Piquet, a mistake under breaking saw the Estonian fly over Piquet’s back wheels and send him spinning into the gravel, unfortunately ending his race and calling a full course yellow. With Maximilian Günther pulling a gap at the restart, Jake relentlessly pushed ahead of Daruvala, not allowing the Indian any chance to make a move. Crossing the line in second place, Jake rose to his second podium of the season, the team gladly gathered under the podium to cheer our Brummie wonder as he collected his well-deserved silverware.

Dripping with champagne, Jake gave us the lowdown:

“I am really happy to be back on the podium. However, we admit that we hadn’t expected that it would take that long for the second podium finish to arrive. I was able to go into the race from the front row and I had a good start and managed to bring second place home”

Boosted by our race pace, the team as ever, focussed on pushing for as many points as possible in the remaining races. Bouncing off the back of his podium, Jake made great strides in securing fourth place, hot on the heels of another podium throughout the 35-minute race. As the field fearlessly vied for every possible opportunity, overtaking manoeuvres proved difficult, with the grid finishing much as it started. Team Hitech tirelessly charged for points, with Nikita and Ralf narrowly missing out. Tadasuke gave another strong and faultless performance in his first outing at the Hungarian circuit.

With the sun peeking through the clouds, in a thunderous roar the Formula 3 grid powered off the line for the third and final outing of the weekend. Each young challenger hooked onto the back of their rival, never separated by more than a half a car length. With chance to overtake just out of reach, our Hitech heroes never gave up in their chase to the flag, with Jake clinching another points haul in 7th, Nikita pulled a solid performance to take the final point in 10th.

Leaving Budapest with a string of point scoring places and a trophy to boot, we set our sights ahead to Norisring on the 1-2nd July.