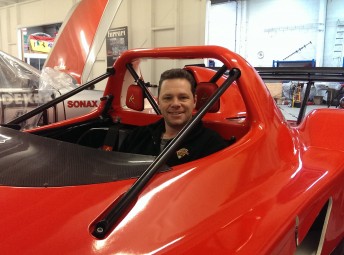 Braeside’s Phil Hughes is used to working with exotic machines as an independent Ferrari, Lamborghini and Maserati repair specialist, so it is no surprise that he is drawn to the Le Mans-inspired cars of the Australian Sports Racer Series.

Hughes will field a Radical entry in this week’s second round of the 2014 Australian Sports Racer Series, which is being held at Winton Motor Raceway across June 13-15.

Hughes has been a part of many racing campaigns throughout his time, including for Allan Simonsen and these days, Tony Defelice and the Team Vicious Rumour Racing Ferrari 458 GT3. For Hughes, Simonsen will always be a companion of sorts when he races his Radical.

“I was a mechanic and a crew chief for most of Allan Simonsen’s early racing in Australia, working with him for Mark Coffey Racing and Ted Huglin’s Consolidated Chemical Company,” said the UK-born, Australian citizen Hughes.

“Allan was a great personal friend of mine outside of racer, even lodging at my home for a time, and the Radical that I will race this weekend is a car that he and I bought together from Denmark.

“We bought it for a bit of fun with plans to eventually sell it on after we had had some fun, but then of course Allan was sadly killed at Le Mans in 2013 and I have decided to keep it. As long as I own it, it will carry Danish flags in his memory.”

“Winton Motor Raceway is a nice track and is great for spectators,” said the 44-year-old Hughes of Mount Eliza in Victoria, who is married to Claire with four children.

“I believe I am racing the only left hand drive car in the field, so I may have an advantage on the left hand sweeper due to the weight distribution compared to the other racers, if I can be brave enough to exploit it! Really as a rookie racer I would be heartbroken if I even got a scratch on the car, so I might be at a huge disadvantage,” laughed Hughes.“To be honest I have only done about four hours in the car since Allan and I bought it, and this will be my first ever race meeting – so I am just going to go out there and see how I go, get some miles under my belt and hopefully better my current personal best while not embarrassing myself!

“While I am off having this fun, I really have to say thanks to my amazing wife Claire, she runs the house and looks after four kids while I take a cheeky weekend to race!”

2014 will be a year of change for the Australian Sports Racing Series, as it steps up to a truly National level for the first time. With spiritual links to the hugely popular sports car racing scene of the 70s and 80s, these LeMans prototype style sports cars offer scintillating performance, amazing dynamics and spectacularly close racing.