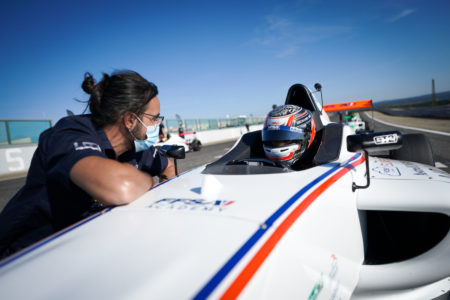 Hugh Barter heads to this weekend’s round of the French Formula 4 Championship at Monza keen to build on his double podiums at the most recent round and continue to amass Championship points as the Series is rushing towards its conclusion.

The Australian, who recently turned 16, has multiple podiums and a win to his credit in 2021, his maiden season in car racing after a storied junior career in karting.

Barter will be channeling the results of Australian drivers around the Autodromo Nazionale Monza over the last few weeks with both Daniel Ricciardo and Oscar Piastri having the Australian National Anthem resonate round the historic circuit in Formula 1 and Formula 2 respectively.

Barter and Piastri both cut their teeth at the same kart club in Melbourne, Australia.

Following on from this weekend at the incredible Monza circuit, Barter will head to Paul Ricard next weekend with the Championship coming to a close over the weekend of October 22-24 at Magny Cours, the Series second visit to the home of the French Grand Prix.

Between rounds, Barter and his team have been working overtime on the commercial side for the remainder of this season and with a view towards continuing his European racing career in 2022.

The team has proudly added some new supporters in the form of AJR International, Astral Energy, Sunified, VCEX and SAFE SOFT.

Having won the Richard Mille Young Talent Academy Scholarship at the end of last season, his family now resides in Le Mans, France near the famed circuit where his Academy training takes place.

Amid training, testing, travelling and racing, Hugh dedicates his time to his studies with his Australian school online.

The Richard Mille Young Talent Academy is a collaboration between Nicolas Todt’s All Roads Management, kart manufacturer – BirelART and renowned luxury watch manufacturer Richard Mille. Barter was awarded the scholarship into Formula 4 after a global young driver shootout that was conducted at Le Mans in October 2020.

“Monza is going to be another great experience for me,” said Barter. “I head there with some confidence after a solid round at Ledenon. It had been a while between podiums, so it was nice to get the Championship points hunt back on track.

“With three events to go, sitting third is a good position to be in, just 25 points off the Championship lead. Monza is a big opportunity, it is a huge track for these cars and a challenge I can’t wait to take on.

“I’ll absolutely be hoping there is some good Australian vibes still in the air when we arrive in Italy after the performances of Daniel and Oscar there a fortnight ago and add my name to the many winners at Monza.

“It will be the first time I’ve been to Monza and following Formula 1 as I do, I understand the history of going there. I’m really looking forward to it and the chance to walk through the old circuit and the famed banking.

“Our support this year from back home has been incredible, along with all of the opportunities being presented to me through the Richard Mille Young Talent Academy and the team at All Roads Management. We’ve still got some work to do by the end of the season and we’re always pushing hard!”