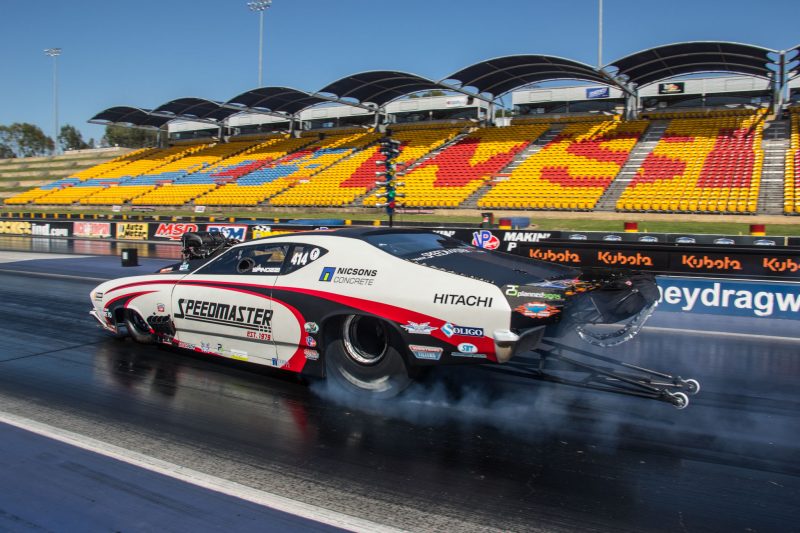 Drag racing is all about the sprint, but the week has been more like a marathon for Emilio and Adamo Spinozzi and their Spinozzi Racing team, who have completed five days of testing ahead of the second round of the 400 Thunder Pro Slammer Championship at Sydney Dragway this Friday and Saturday.

A long break after the opening round of the series in Darwin allowed the team to make some changes to their set up in the hopes of finding repeatable runs in the Speedmaster Chevelle. The theories have produced some early results, with driver Emilio Spinozzi clocking his quickest pass yet, a 6.020 personal best.

“The car is getting easier to drive, it is becoming smoother,” he said. “We’ve been making runs without tyre shake and that means I can concentrate on shifting and everything else that is going on instead of battling the car at the steering wheel.

“We are happy with the personal best and we are going forward. In saying that, we are pushing and we want our first five second run. We came from Pro Stock where we were at the top of the heap, now we are at the bottom and that is hard to swallow. We are working hard at it and will keep working until we get it.”

Spinozzi not only ran his quickest time, but also his fastest speed of 252.7mph (406.6kph). Crew chief Mick Marriott said the speed reflected fuel system changes and a happy engine, as a myriad of other changes deliver gains through the rest of the track.

“We have been able to get consistent back-to-back passes where we can change something and see the difference,” he said.

“One of the things we have done is change the way we run the clutch, which has showed dividends straight away. We feel we are at a point where we can move forward.

“We made Tuesday’s testing an experimental day, then came back on Wednesday to more what we know and so far that has worked for us.”

Qualifying for East Coast Thunder will take place on Friday, with eliminations racing on Saturday, meaning Spinozzi Racing’s consistency could come in handy.

As well as performances on the track, the team has been drilled in engine maintenance all week, including doing a rod change at the track. While such a task might seem old hat for the experienced teams of Pro Slammer, for Spinozzi Racing it was an opportunity to fine tune pit area processes.

“This week we are really starting to get our head around it and it shows,” Spinozzi said. “Personally I think we are doing well, but we are hard on ourselves where we would like to do a lot better.”

For further information on Spinozzi Racing or this media release, you can contact Luke Nieuwhof at [email protected]