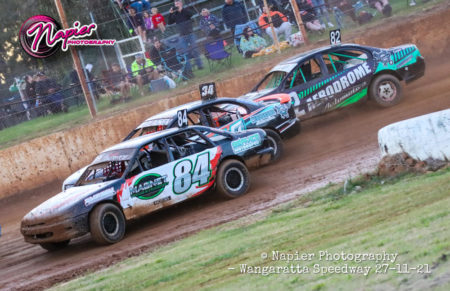 This past Saturday night the 27th at City of Wangaratta Raceway seen some ninety competitors start their engines and give their race cars some stick in the first race meeting of Wangaratta’s season and the first for many this season anywhere.

Eight classes competed with two visiting classes and six club classes all having a run. Josh Service from the eastern suburbs of Melbourne picked up a win in the first round of the Darren Levy Memorial series in Sports Sedans, Stephen Laidlaw from the Latrobe Valley won the Production Sedans track series round and for the visiting classes Michael Conway and Chris Fowler also took victory in Compact Speedcars and Grand Prix Midgets respectively.

Action from the Production Sedans was, let us just say ‘keen.’ A few cars worse for the run with some damage caused to each other trying to get through turn two made worse by water from the pole line and inside the pole line making its way onto the track sending cars slip sliding into each other more than once. Benny Barker from Hamilton in the states South West winning the first heat race and from there Barker maintained a podium place all night. Stephen Laidlaw also won a heat race before Portland New South Wales based youngster Jaiden Healey won the third heat race.

A twenty-lap final for the Production Sedans finished with Laidlaw a former two-time Australian champion taking the win from Barker who was outstanding across the night, Trevor Mills from Corowa whom recovered from heat race damage to dart up the pole line at the start of the race and grab that third place, Healey who was sensational against the legend drivers in the field and Jack Bear also from Corowa.

Sports Sedan action began with Andrew Jordan from Melbourne’s east leading the way ahead of his mate Service and North East Local Rhys Collins. Service snatched the lead on lap three and Jay Nicolaisen and Joel Copeland were stuck right in the action at the front of the field in battle with Collins. Felicity Roycroft whom had an outstanding night across three race categories became part of the top five action as Copeland dropped down the order.

Collins crashed on lap nineteen with six laps to go and at this point Service lead Nicolaisen, Jordan, Roycroft and Jamie Thomsen and that is the way the field finished the twenty-five-lap race. Heat action earlier finished with wins to Jaidyn Dredge, Jordan twice, Nicolaisen, Services and Copeland.

Compact Speedcars came to Wangaratta for the first event of their season long point score and a run-in anticipation of their upcoming Australian title event at the same venue, getting some much valuable laps around the track to help consider set ups. Justin Paul won two of the three qualifying heat races with Michael Conway the other and on all three occasions the two drivers finished in first or second. Gavin Cooper had a rollover, the first of the tracks season and walked away fine, with a little work to do on the race car.

Into the feature event Paull lead Conway and Matt Papa through the first five laps before his car stopped with mechanical issues handing the lead over to Conway. Daniel James moved into the top three. Louis Rodriguez had a horrible night finishing one of his three qualifiers mid-pack and not finishing the others or the final. Conway the winner from Papa, James Mark Cecil, and Tania Hallett.

Street Stock action from a small yet competitive line-up finished with Shane Roycroft winning two heats of the three and Shane Ardley the other. If your name was not Shane, there was no chance of winning in Street Stocks as Shane Roycroft went on to win the final from his wife Felicity Roycroft, Ardley, and Darren Henderson who visited from New South Wales.

Roycroft from Kialla finished her outstanding night where she finished fourth in Sports Sedans and second in Street Stocks with a win in the Ladies Open Sedans class. Roycroft won all three heats on her way to cleaning up in the feature event defeating Katie Meyer from Ballarat, Jaimi Barber, Emily Mason, and Renah Pollard.

Like Roycroft, another driver to win every race in one class on the night was Marcus Maclean from Corowa. Maclean had Michael Sayers and Hunter Carey chasing his tail in the heat races before the final of the night finished with Maclean the winner ahead of Carey, Riley Balins, Toby Parks and Tom Little.

Ash Booker and Chris Fowler were the outstanding drivers in the Grand Prix Midgets racing with both drivers’ winners of the club point score for their class in Victoria. Booker won the first qualifier, Fowler the second and third. Then for the final based on qualifying points and Bookers stronger consistency after finishing well across all three events, Booker started rear as per the club supplementary rules. With a new twist instead of just automatically reversing the grid as they had in the past with top points at the rear, the drivers got to choose the car to start directly alongside them or in front of them if it works out that way. Booker chose Fowler and Fowler chose Shawn Ward and so on and so forth.

The feature event was terrific with the top two cars Fowler and Booker quickly finding the front of the pack and soon weaving through traffic. Fowler was the leader all the way and he wrapped up a victory with Booker second, rookie class entrant Daniel Meredith, Benalla racer Jack Ward and his father Shawn.

Finally, the Standard Saloons had a terrific field and therefore six qualifying heats to run. Daryl Joosten, Wayne Sheerman, Rhys Lansdown, Jaimi Barber, Lansdown again and Warrick Howie all won heat races. The feature race action began with Wangaratta member Warrick Howie who is from the Chiltern area lead the way with Sheerman and Lansdown chasing hard. Sheerman was last seasons class Super Series champion and he along with Lansdown who was second in the same series had a fight on their hands with the former Victorian state champion Howie.

Sheerman took the lead from Howie on lap eleven whilst Joosten and Barber battled for fourth and fifth. On the final lap, Lansdown took the second spot, out front Sheerman greeted the chequered flag ahead of Lansdown, Howie, Joosten and Barber who is also Howie’s partner.

A terrific night in the books. Racing returns on January the 15th. With the AMCA Nationals Victorian series, the Grand Prix Midgets Wangaratta Cup, second round of the Darren Levy Memorial Sports Sedan series and the second round of the Production Sedan track series along with club classes.