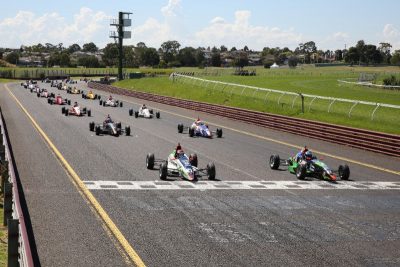 Hunter McElrea is currently leading the Formula Ford standings, 17 points clear of Sonic team-mate Hamish Ribarits. A further 60 points separate Ribarits and Queenslander Cameron Shields in third. The BF Racing driver will sit out this round due to conflicting racing commitments, meaning the battle for the top three in the championship and a ticket to the 2018 Mazda Road to Indy Shootout is well and truly alive heading into the business end of the season.

In the FF1600 field, Queenslanders Tim Hamilton and Dylan Fahey are currently separated by five points. New South Welshman Robert Rowe sits in third, 13 points behind the duo, ready to take advantage of any mistakes and take the lead of the FF1600 Championship. Neither Hamilton, Fahey nor Rowe have visited the iconic Victorian circuit previously, and reigning Victorian champion and current state series leader Brendan Jones is hoping to use his track knowledge to challenge for race victories this weekend.

On-track action for the Formula Ford field kicks off with practice on Friday, followed by qualifying and three races across the weekend at Sandown Raceway.