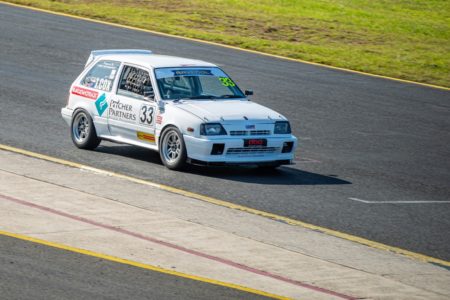 After a wait of 174 days since the last drop of a chequered flag, the Ravenol Improved Production NSW field will roar into life once more at Sydney Motorsport Park this weekend.

A record 47 entries have been confirmed for the Sydney Supersprint event, which runs on Saturday 13/Sunday 14 November at Sydney Motorsport Park.

The long layover has enticed some of the category’s big names to dust off some of the fastest cars in the Improved Production field, lining up to tackle three races across Saturday and Sunday.

TCR Australia race winner and former Improved Production NSW champion Jordan Cox will return to the category that he made his own, thanks to the audacious passing moves in his Honda Civic that are now YouTube folklore.

“It’s a great chance to blow away the cobwebs ahead of a big end of the year,” said Cox, who will line up in his wild turbocharged Suzuki Swift. “The Swift is such a blast to drive and it’s awesome to see so many racers coming out to support the category.”

With twelve different marques and twenty different models racing, the Ravenol Improved Production category – running as one single class this weekend – is arguably the most diverse to support the Supercars series.

Kurt Macready’s Nissan Silvia leads the Under 2L championship, while Lachlan McBrien (BMW M3) and Trevan Spiteri (Mitsubishi Evo 6) are tied in points for the Over 2L championship, heading into this final round of the abbreviated 2021 championship. Other manufacturers include Ford, Honda, Holden, Renault, Mazda and Toyota.