Huge crash puts an end to a bright start

Huge crash puts an end to a bright start 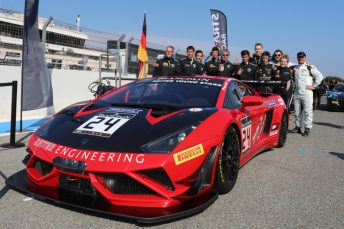 Caitlin Wood and Marko Helistekangas, the 2016 winners of the REITER YOUNG STARS, had expected a lot from the 1,000 km race at France’s Paul Ricard circuit. EX F1 driver Tomas Enge was also there to be the team’s experienced hand in the Blancpain GT Series Endurance Cup race, and that had been great motivation for the two young drivers from Australia and Finland.

It was always going to be a tough task for the trio to compete against the 58 car line-up who made the journey to the South of France, but even in free practice and pre-qualifying, they showed a solid presence in the Lamborghini Gallardo GT3. Making steps forward the two youngsters Wood and Helistekangas registered some good times which were often mid-field times. The team was then ranked 38th in a hectic Qualifying. Team boss Hans Reiter was not very satisfied. “We should have pre-warmed the tires, that was my mistake. But it was nevertheless an ok starting position for the race. After all, it is over six hours and a lot can happen.”

And “a lot” did happen. Czech former F1 professional Tomas Enge opened the race for the team, and there was a dramatic change of events after only 14 laps. After impressively overtaking 10 cars only 14 laps into the race, Enge hit a curb with full force at 270 km/h while trying to overtake on the fastest part of the circuit and was catapulted almost a meter in the air and off the circuit. The car then slid across the field of 58 starters right over to the other side of the track and then hit the guardrail at high speed!

Enge was able to get out of the wreckage of the Lamborghini GT3 R-EX unaided but received trackside treatment by emergency personnel, and because of the symptoms he was displaying, he was flown by helicopter to the nearest hospital in Toulon. Diagnosis: broken ribs and a Pneumothorax.

Tomas Enge indicated with his humor that he was not particularly impressed with the course of events. When the team decided that wearing his oxygen mask he looked a bit like “Bane” the bad guy in “Batman”, he immediately sent appropriate photos to the team. And even the hospital wasn’t able to retain him very long. He was already on his way back to Reiter Engineering in Kirchanschöring, Bavaria after only one day’s rest.

“Tomas was back at work just two days after his accident,” was how Hans Reiter described the previous days. On the one hand, the entire team is very pleased nothing serious happened to him, and on the other, they feel very sad about the situation for the two young drivers. “For Caitlin and Marko this was naturally the biggest punishment of all. They didn’t get to drive a single meter, and we’re very, very sorry about that,” team boss Reiter commented.