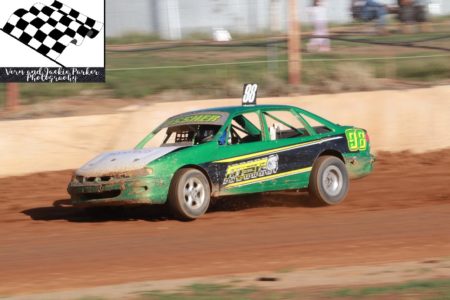 This Saturday night two weeks after the first show of the season, Wangaratta City Raceway will deliver yet another big, big race event with not one, but three major feature events, all on a Carnival night show with activities and food around the venue to keep the young and the young at heart busy.

On the back of a near packed facility at the first show of the season, a race night with features for the three biggest race classes in the North East of Victoria should lock in your plans for this weekend with plenty of action on track.

The ‘Burson’s Wangaratta Stampede’ for Production Sedan has competitors from New South Wales, Victoria and Canberra all nominated to compete for $1000 to win, whilst the Goulburn Ovens Sedan Association ‘Jabek Transport Invitational’ should be a hard-fought race after the class Victorian title event due for Swan Hill last Saturday night was cancelled due to the state lockdown. Whilst Standard Saloons will compete in the ‘Country Concrete Showdown’ feature also and Grand Prix Midgets, Sports Sedans, and Junior Sedans complete a packed programme.

In Production Sedan racing Raymond Ussher who won in Sports Sedans in the first show of the season, converts his car back to Production specifications and will try to go back-to-back with wins. It will not be easy however with former national champion and Wangaratta local Chris Lack and a pair of drivers both of whom have been national champion twice in the field, Trevor Mills from Corowa, and Stephen Laidlaw from Gippsland. Then add in half a dozen other drivers that could be in the final fight for victory, we dare not try to pick a winner.

In Standard Saloons Brendon Eames who won the first final of the season a fortnight ago, has a target on his back now that he has chalked up a ‘W’. Michael Poole, Wayne Sheerman who looked the likely winner early last meeting, Trevor Evans in his Nissan Skyline Station Wagon and the visiting Blencowe team from West Gippsland of Jeff and Mitchell Blencowe are all terrific racers. Jeff Blencowe won some seriously big races in Gippsland last year at Nyora and Drouin and is sure to figure at the finish.

In the Goulburn Ovens Sedan Association feature event, Ross Maclean from Corowa has been the dominant driver for a long time, it is hard to look past Maclean for the victory based on history. With Wangaratta members Nathan Shortis and Tom Barnard in the line-up plus Justin Brockley, Wayne O’Keefe, Chelsea Cornelius, and Jamie Atkin, they are the drivers that media feel might be in the mix come the final laps.

The Grand Prix Midgets on Sunday thought they were racing at Rushworth; come Sunday night they were swapped over to Wangaratta just two weeks after their Victorian title. Chris Carr from Wangaratta will be looking for redemption after his title race was cut short by mechanical failure. The new Victorian champion Louis Rodriguez returns two weeks after winning his title at Wangaratta and so does Janelle Saville who was the darling of the show qualifying pole position for the title, she travels in from the Goulburn New South Wales area.

The gates to the public open from Midday and racing begins from 5pm.