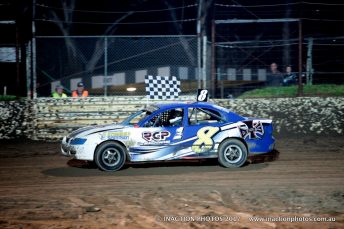 Wahgunyah Speedway for the second race meeting in succession defied the threats of rain with a complete race program being run to the thrill of motorsport fans in the Murray River area and beyond, winning important races were Warrick Howie going back to back in a Memorial race remembering his brother, Rodney Pammenter from Queensland winning the NSW Modified Sedan title back to back and Sydney’s Glenn Mitchell winning his first Victorian Legend Car title.

Lining up for the feature race, Howie and Stewart began from the front row and led Darryl Joosten early. Starting in seventh Scott Whittle a crowd favourite in a big Valiant Charger General Lee, moved up to third by lap five. On Lap nine Whittle moved into second.

With the front running cars passing backmarkers on a consistent and regular occurrence, at times it got confusing as to where drivers were however after twenty laps and at the chequered flag, Howie went back to back in the Memorial with Whittle, Stewart, Marshall and Andrew Robl rounding out the top five.

Legend Car competitors from NSW and Canberra were on hand to compete in the Victorian title. Last time the Legend cars came to Wahgunyah Glenn Mitchell won the feature that night and winning the Victorian title was high on his agenda this time around.

Fast forward to the final and Mitchell took a deserving win from Heaton, Griffin, Hebditch and Anthony Boers.

The anomaly of being a Speedway in Victoria managed by a New South Wales town 5oo metres away in partnership with a Victorian town 15 kilometres away means that Wahgunyah often has NSW and Victorian titles, and this time the NSW Modified Sedan title was decided on the same night as the Victorian Legend Car title.

Queensland Rodney Pammenter was keen to go back to back in the NSW title and on a track when he last visited he walked away with a $3000 pay day. In qualifying Pammenter won all three of his races and competitors were scratching their head in regards to what they could do to compete with him. Dave Clapson, Russell Bent and Clapson again won heat races.

In the title race Pammenter made it four from four with victory over Mark Carlin a multiple times Australian Champion in the class, Trevor Mills, Russell Bent and Kye Walters.

Ashleeh Bunt won all three heat races before winning the feature in the Junior Sedans when she proved to strong on the night for Toby Carmichael and Zac Twomey.

The next race meeting is the June 10 show with a Production Sedan $1000 to win feature, AMCA Nationals and all club classes.