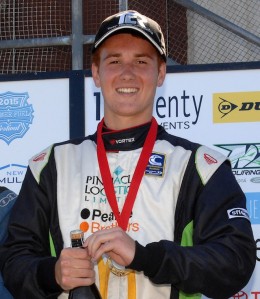 A return to Winton in early May will see the 17 year old test an Australian Formula Ford.

With a third test session back in New Zealand with Toyota Racing mid-May, the Hamilton high school student will have several options available for his team to weigh up with a view to racing in the coming season.

“We head over Tuesday with a day of testing at the Formula 4 Series shakedown on Wednesday,” said Cockerton.

“I’m really looking forward to getting into a ‘wings n slicks’ car and learning how to drive a more powerful car.” The new category focuses on driver development with minimal costs.

The seven round series will run at selected V8 Supercar rounds with up to 20 cars on the grid. The Mygale chassis is powered by a 1.6 litre 160 bhp coupled with a six speed sequential gearbox.

“The experience is going to be great, particularly with the new technology,” commented Cockerton.

The 17 year old will return to Winton in early May to test an Australian Formula Ford with Greg Woodrow, the Australian importer of the Mygale chassis. 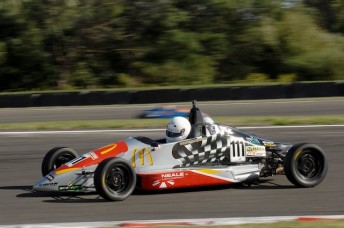 “The main objective is to learn the track and, understand the difference between an Australian and a New Zealand Formula Ford,” commented Cockerton.

While the chassis are the same, the Australia car has approximately 20 more horse power from a 1.6 litre Ford Duratec engine compared with the NZ 1.3 litre Kent engine.

“My driving style will need to change and adjust to the difference. We are looking to compete in one or two of the Australian Formula Ford rounds this winter, again with the aim of learning the tracks.”

Straight after the Winton test Cockerton will head back to New Zealand for a Toyota Racing Series test at his favourite track, Hampton Downs.

Again more horsepower and aerodynamics will be available with the TRS car powered by a 1.8 litre Toyota engine producing over 210 hp.

“I’m super excited about this as I love the track,” said Cockerton.

“Again it will be getting used to ‘wings and slicks’, more power, aerodynamics and the latest technology.

“It will be a matter of adjusting my driving style and getting to grips with what the car can do on a track I know well.”

“We will then sit down and look closely at the options available to us. We will not be ruling anything out. All are possibilities.”