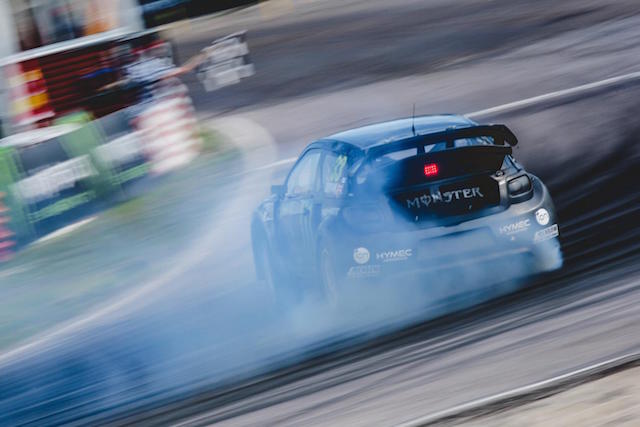 MEDIA RELEASE: The FIA World Rallycross Championship presented by Monster Energy will resume after a short summer hiatus as the teams cross the Atlantic for Canada RX, round seven of the 13-event calendar.

A total of 20 Supercars will compete at Trois-Rivieres as well as eight RX Lites in the standalone RX Lites Intercontinental Cup. Reigning Champion Petter Solberg continues to lead the Drivers’ Championship, 44 points ahead of Johan Kristoffersson.

NASCAR Canada will kick off the week-long celebration as World RX marks the conclusion. Also racing during the same two days as World RX will be SxSx (side-by-side-cross), Formula Drift Canada and FestiDrag Castrol.

Carpentier caught the eye on his RX debut in 2014 when the five-time IndyCar race-winner finished sixth overall. “I loved the event last year,” reflected Carpentier, before adding: “I analyse World RX for Canadian TV and I was pleasantly surprised when the JRM car made the final in the recent UK round. That was really impressive and hopefully we can make the final again in Canada.”

Despite his experience behind the wheel as the reigning Canadian NASCAR Champion, Dumoulin is new to rallycross and admits the level of competition will be tough.

“Of course I want to be up front, do well and be part of the final but, with all the respect I have for the other teams and drivers, my expectations are to show up, work with JRM and try to get the chemistry going quickly,” he explained.

Dumoulin added: “I’ve driven many different types of cars with lots of power – GT cars, Porsches and NASCAR, that kind of thing – but the package of the World RX car is very special, with four-wheel drive and a lot of horsepower.

“I’m used to a sequential gearbox and left-foot braking, so that will be no problem. I did some ice racing when I was a kid with my brother, which was a lot of sliding and counter-steering. I’m really excited about the challenge.”

“It’s always tricky to come into the series as a guest driver because you have just a little less familiarity with the car, the tracks and just the overall racing flow, but I’ll do my best to get up to speed quickly,” admitted Foust, who became the first American to win a round of World RX after triumphing in Finland last year.

Out of the 17 other Supercars entered for Canada, there are two notable changes: Austrian rally driver Chris Brugger will replace team owner and driver Max Pucher in World RX Team Austria. Pucher explained: “I will not be participating in Canada due to conflicts with four other races while my car would have been en route to Canada and Trondheim.

“We are also using this opportunity to sponsor young Austrian racing talents to try out World RX. Austrian rally driver Chris Brugger will take my place in Canada and he will enter as a third wildcard driver for our team in Hell. He participated in the RX Lites test event in Istanbul last year and did pretty well.”

Brugger added: “I was able to gain a feeling for the team at the World Rallycross event at the Estering and the most recent round of the Austrian Rallycross Championship in Greinbach. I can only thank them for giving me the opportunity to contest such an incredibly exciting and thrilling sport at international level.”

Replacing Alx Danielsson in the ALL-INKL.COM Muennich Motorsport team with the Audi S3 will be Tommy Rustad, who won the previous Euro RX round in Germany. Team owner and regular driver Rene Muennich will race the second team car in Canada.

Since the previous round in Sweden early last month, several of the drivers have been busy with other projects. Solberg and Reinis Nitiss attended the press launch of Latvia RX where the duo completed a four-lap exhibition race ahead of the news that Latvia would be added to the World RX calendar from 2016.

Solberg continued his tour of the Baltic region as he later visited Lithuania and Estonia to watch his son Oliver compete in NEZ crosskart.

Nitiss was joined by his Ford Olsbergs MSE team-mate Andreas Bakkerud and Marklund Motorsport driver Topi Heikkinen at the end of July when all three took part in a Lada race. “I’m not really used to driving that kind of car,” explained Heikkinen, “but the main thing is that it was lots of fun. The fans are really stoked about the sport and I’m looking forward to racing in Riga next year.”

EKS driver and owner Mattias Ekstrom has continued his run of success in the DTM after triumphing in the fifth round which was staged at Spielberg last weekend. Ekstrom, who won the previous round in Sweden, is now leading the DTM standings and is placed seventh in the World RX Drivers’ classification.

Team Peugeot-Hansen has had a solid start to the year, with team-mates Timmy Hansen and Davy Jeanney placed fourth and sixth respectively in the World RX Drivers’ table.

“Since Holjes, my summer has been a lot of about training and spending time with my family. I completed a three-day MTB fitness camp with the Swedish national team and I’ve enjoyed a holiday in Greece starting each day with some training. Now I feel in very good shape and my motivation is through the roof,” enthused 22-year-old Hansen.

Tagliani will be joined by two other Canadians including Pro Mazda Championship front-runner Garett Grist and Monster Energy athlete Brett Turcotte – a successful snocross rider and regular in the Winter X Games.

Frenchman Cyril Raymond will make his debut in World RX following an impressive test in the Lites car in Istanbul last year where he was quickest out of 23 entrants. Meanwhile, Oliver Eriksson and Alejo Fernandez will swap GRC Lites for World RX.

Martin Anayi, World RX Managing Director for IMG, concluded: “Canada delivered a spectacular event in 2014, and this year the organisers have been working hard to ensure our only street circuit race is even better.

“The approach to turn one is the longest of the whole year, with drivers reaching just over 200km/h at braking point. It’s fantastic to have five native Canadians joining us for their home event.

“Patrick [Carpentier] performed well on his RX debut last year, and it will be interesting to watch how he and LP [Dumoulin] get on as they pit themselves against our permanent drivers.

“It’s an honour to welcome Alex [Tagliani] to World RX in one of the Lites cars.

“He has proved himself as a hugely successful IndyCar and NASCAR driver and his entry at Canada RX demonstrates once again that rallycross has the ability to attract drivers from a wide variety of motorsport disciplines.”