Horsepower of a different kind on Melbourne Cup weekend at Nyora

Horsepower of a different kind on Melbourne Cup weekend at Nyora 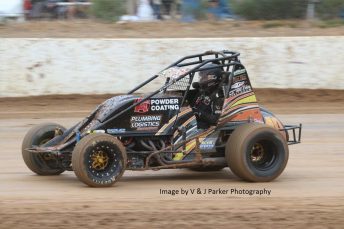 Nyora Raceway this weekend will have two days of horsepower of a different kind this Saturday and Sunday in the lead in to Melbourne Cup Day with local dirt track racers competing in Standard Saloon, Sports Sedan, Open Sedan, Junior Sedan and Mini Sprintcar competition, whilst the popular Wingless Sprintcar category compliment what will be a great show.

Standard Saloon racers will compete across two days in the two driver event, which finishes on Sunday with a 50 lap stop and go, change the driver feature. The event will see the Ladies mixing it with the Lads in a fun event with a little cash up for grabs. Mark Miles teams with Brendan Miles in a very strong Nyora combination whilst Amanda Burrows has joined forces with Victorian Ladies Standard Saloon Champion Tracey Ingram.

Nick Chrystie and his cousin Brody, and former two times Victorian Champion Chris Stewart and his brother Shane on paper look to be the two strongest teams with the combination of Aaron Meakins and his wife Sarah a multiple times Victorian Ladies champion a very capable combination, keep an eye on them.

Mini Sprintcars will have a round of their local Wonthaggi Motorcycle series on both days to make up for the wash out at the first event with Owen Schnoor, Darren Schnoor, Dave Alie and Andrew Burleigh drivers to watch and Sports Sedans have a Victorian state point score feature on the Sunday with competition coming from Ballarat and Geelong including Leigh Bourke and Lucas Conder to do battle with Nyora’s Troy Glassborrow, Daniel Angus and Peter Angus.

Wingless Sprintcars compete on both days also with plenty of local members amongst the class including some of Victoria’s stronger drivers Wayne Logue from Morwell, Ross Jarred from Mirboo, Warrick Taylor from Cranbourne, Todd Hobson from Clyde and Peter Logue another from Morwell.

Junior Sedan competition includes a number of Nyora youngsters including the O’Donnell Sisters, Ally Morrison, Kiarna Barton and Logan Mair up against Alexandra members Breanna Simpson, along with sister and brother Courtney and Rhys Meakins and Open Sedans will run on Saturday night with Dale Mead, Warrick Tayor, Sean Lister and Micheal Ardley brining their big V8 Chassis Cars out to play.

Action begins on Saturday from 5pm and then again on Sunday from 3pm finishing at 9pm on the Sunday.