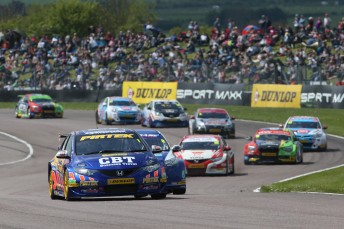 Reigning champion Andrew Jordan extended his advantage at the top of the Dunlop MSA British Touring Car Championship standings after an impressive win in the opening race at Thruxton, before the Honda of Gordon Shedden and BMW Colin Turkington claimed the honours in races two and three respectively. Pirtek Racing’s Jordan secured pole position for the third consecutive season at the high speed Hampshire circuit, but surprisingly had yet to taste victory champagne at what is arguably the UK’s most daunting track. That all changed when he took a lights-to-flag victory in the opener, however, which he followed up with second and fourth place finishes in the other two contests. Honda Yuasa Racing’s Matt Neal and Gordon Shedden completed the podium in race one, but the latter would go even better in the next showdown. Shedden attacked for the lead from the outset but was lucky to stay in contention after running off at the Campbell/Cobb complex on the first lap. It was the eBay Motors BMW of Rob Collard that took the challenge to Jordan in the immediate aftermath of Shedden’s moment, but the Honda was soon being hauled back towards the leading duo. Now running line astern, Shedden eventually got by Collard coming out of Church corner and the top two began to pull clear. Jordan’s hatchback looked decidedly looser than its Tourer rival and when the former slid wide through Church, Shedden got a run on the outside of Brooklands and made the move stick before they’d reached Club on lap 11. Shedden went on to win from Jordan and Collard. It was Colin Turkington’s turn to star in race three after the Ulsterman surged from fifth on the grid and into the lead before the end of the first lap. It was a postion the BMW driver would keep until the finish line, promoting him up to third in the overall championship standings behind Jordan and Shedden.The Airwaves Racing cars of Mat Jackson and Fabrizio Giovanardi were second and third respectively, rounding out an impressive day for the Wrotham-based squad.The two Ford Focuses battled for a number of laps, with Team Owner David Bartrum warning his drivers to ‘play nicely’ over the team radio. That’s exactly what the experienced duo did with Giovanardi eventually relinquishing second place to his faster team-mate on the day. Jackson had already secured two top five finishes earlier in the proceedings, so this weekend represents his and the team’s biggest points haul of the season so far. The final race will be largely remembered for a huge accident involving the Toyota Avensis of Simon Belcher at the fastest corner in the country. His car went off at well over 100mph before hitting the barrier and barrel rolling over the tyre wall at Church Corner. Belcher emerged from the car completely unscathed although the same couldn’t be said for his rather second hand looking Toyota.MG KX Clubcard Fuel Save endured a rather challenging day as it lost ground to Honda Yuasa Racing in both the Manufacturers’ and Teams’ standings, with eBay Motors moving into second place in the latter. Andrew Jordan said: “It feels great to finally convert a pole position at Thruxton into a victory. Race three was mega for us too. To come through unscathed and get a decent points haul is brilliant. It’s been a great touring car weekend, and a great weekend for Honda. The main thing is that we’ve got a lot of points on the board and managed to get through Thruxton without any major issues, which can be tricky to do around here!” Gordon Shedden said: “The first two races today were fantastic although the third one was a bit chaotic! It was important to come through and get good points in race three with weight on-board. The Civic Tourer has done really well here – like I’ve said we learn more every time we get in the car, so it’s onwards and upwards to Oulton Park now.” Colin Turkington said: “I’m so glad we held on to that one – it’s a bit of redemption for what happened in race three at Donington Park! We started this weekend with a really tricky car to drive, but to be so fast in that race is a big reward for the team. This has been a bit of a bogey track for us – I don’t think a BMW has won here since 2009, so to take that win was really special. I was a little worried with the two safety cars, but because Thruxton works the tyres harder I was able to keep them in the sweet spot and race for the full distance.” Mat Jackson said: “It’s been a very, very good weekend for us. It’s been a long time coming, but it really clicked with the Focus – it’s been awesome all weekend, and to be fighting with the championship contenders shows just how quick we can be. Fabrizio is getting to grips with the car too, and to see two Airwaves Racing cars up there in podium positions is great for everyone in the team.” Fabrizio Giovanardi said: “For a few seconds I thought I might even win race three! In turn two I lost the rear and had a big slide and Turkington was able to get past. I didn’t want to hold Mat up so let him come through, and then in the last few laps everyone else wanted to come past as well! That made it really good fun! I am learning the car all the time – I’m definitely not rusty, I just need to learn how the car works at all the tracks. Hopefully we can get a few more podiums.”