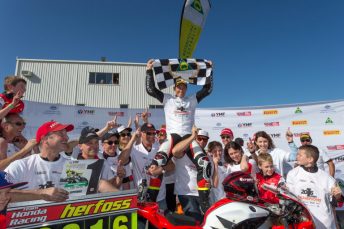 After wrapping up the ASC Superbike Championship in 2015, Herfoss has added yet another achievement to his growing resume by taking a second place and a race win which ultimately awarded him with the 2016 Superbike title.

Herfoss has won three rounds this year along with three Pirelli Superpole victories throughout the season.

He shared his thoughts moments after stepping off the 2016 Superbike podium; “It’s so hard to explain my emotions at the moment… the feeling of winning races makes this victory so much better and I really wanted to stamp my authority on the Championship and show that I deserve it,” he said.

“I am just really proud to win this championship for Honda especially with this bike. To get another Championship for them is really a proud moment for me and a big thank you to the whole Crankt Protein Honda Team.” He added.

After qualifying in fourth position on Saturday, Herfoss’s teammate Jamie Stauffer also raced to impressive results on Sunday throughout the two Superbike races. Stauffer took fifth in race one and sixth in race two, to finish in sixth for the round and in eighth overall in the Superbike Championship.

“Today wasn’t a bad day for me and for the team it really was a bit of a fairy tale with Troy wrapping up the championship,” Stauffer shared.

After a year with some hurdles Stauffer felt his performance in the last two rounds was positive.

“It’s been a bit of a hard year personally with injuries but in the past two rounds I have started to feel like myself again and we managed to get some better results which is a nice way to finish the year… I can’t thank the Crankt Protein Honda Racing Team enough for their support throughout the season” he said.

“What a day! It’s hard to put in to words how rewarding this championship is for not only Troy but the entire team of people behind the scenes who have worked tirelessly to get to this point,” Free said.

“I would like to personally congratulate Troy on his 2016 Championship and of course Jamie as well for fighting all year long despite carrying a number of injuries.

“Also a big thank you to all of our dedicated staff and sponsors who made this Superbike Championship and racing this year such a great success, without them our achievements simply wouldn’t have been possible.