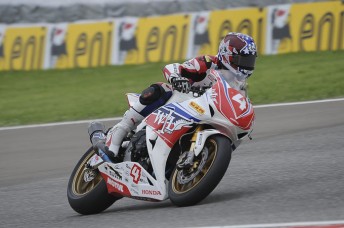 After a month’s break in the 2014 schedule, the Racedays Honda Superstock squad is all set up at Misano World Circuit ‘Marco Simoncelli’ for round four of the teams’ respective championships.

In the FIM Superstock 1000 Cup, Josh Day and Kyle Smith will be looking to fire their Honda CBR1000RR Fireblade SP machines to the front of the pack with American Day, 24, seeking another step forward to follow up on his impressive fifth-place finish last time out at Imola in italy.

Day has raced at the 4.226km Misano circuit on Italy’s north-east Adriatic coast twice before but it represents a new challenge for British rider Kyle Smith and the 22-year-old is relishing the opportunity to get back to the podium ways with which he started the season at Aragon in Spain.

In the European Superstock 600 championship, Racedays Honda riders Kevin Manfredi from Italy and New Zealander Josh Lewis are looking forward to getting back on their Honda CBR600RR machines. British rider Harry Stafford will not compete at Misano, however, as he continues to recover from injuries sustained in a crash at Imola last month.

I think it should be a good weekend and the weather is looking OK. We should have some momentum going after our fifth place finish at Imola which was a good result for us. We need to figure out how to close the gap to the front but I think we’re heading in the right direction. I’m starting to get really comfortable on the bike now and the team is working really well together. It’s all coming around so we’ll just have to see how it goes at the weekend.

I’m feeling good and, after two bad races at Assen and Imola, I’m back with a vengeance! Misano is a new track for me but I’ve been looking at a few videos on the internet and it looks like a fast track. I’ve always liked fast tracks and I think the CBR does, too, so hopefully we can be back on it like we were in the first round at Aragon. I think we can, but it’s just a case of putting it all together.

We’re really looking forward to these Misano races. Kyle was running very strongly at Imola and had a good chance to run at the front. Unfortunately, he crashed out of the race, but he was there. Josh had a brilliant race to finish fifth and we hope he can improve on that this weekend. In the 600s, Kevin crashed out at Imola when he was in sight of fourth or even third. It’s another home race for him here so he’ll need no motivation. We’re hoping all the guys can keep it together this weekend and score some top results for Honda.